Clover Health Investments (NASDAQ:CLOV) recently made its public debut after merging with one of former Facebook executive Chamath Palihapitiya’s SPACs (special purpose acquisition companies). Of the four companies Palihapitiya has targeted so far — the other three are Virgin Galactic, Opendoor Technologies, and SoFi, soon to merge with SPAC Social Capital Hedosophia Holdings V — Clover gets me the most excited. Here’s why.

Statistics show that most Americans think the healthcare system is “broken”. Between high and still-rising costs and a shrinking number of choices in care options, the state of U.S. healthcare hasn’t been in a great place for decades. Enter Clover, a “next-gen Medicare Advantage” company — that is, a private insurance option for those on Medicare.

But why disrupt healthcare via an insurance offering? After all, Clover isn’t alone in its mission to overhaul the health system status quo. Other firms like Teladoc Health and Amwell are using remote care, video conferencing, and data technology to reshape the way patients obtain health help.

The more than 10,000 Americans turning 65 every day is likely why Clover started as a Medicare plan. But Clover opted for the health insurer route for another intriguing reason: At the beginning of its investor presentation, the company shows a slide illustrating the incredible investment returns for healthcare insurer giants Humana (NYSE:HUM), Centene (NYSE:CNC), and UnitedHealth (NYSE:UNH) over the last decade — rivaling the investment returns of tech giants like Google parent Alphabet and Facebook.

Given health insurers are a less-than-loved business model, it may come as a surprise these companies have done so well. But insurance is the gatekeeper of the U.S. medical system. And as it encompasses some $4 trillion in spending every year (nearly 18% of U.S. GDP in 2019), healthcare is a big market being locked up by the insurance industry. Suffice it to say Clover sees ample opportunity if it can shift power away from insurance providers and back to patients and actual healthcare providers. Just a small slice of this very big pie could make for an intriguing investment.

As of this writing, Clover reported operating its Medicare Advantage platform in just seven states (34 counties total thus far), equating to just 57,315 members and revenue of $507 million through the first nine months of 2020 (a 46% increase from 2019). And flush with $1.23 billion in cash after its IPO, Clover has an ample war chest at its disposal as it tries to keep its momentum going. 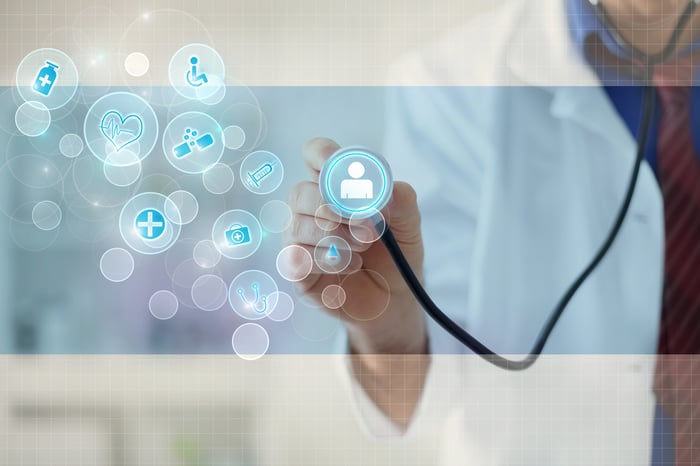 How the platform works

Simply writing off Clover as another insurer would be a mistake, though. Another benefit of the insurance industry is the vast amount of data it has on its insured population. Rather than use this data to optimize pricing for itself, though, Clover aims to empower healthcare providers directly via the Clover Assistant. The web-based application is free to use for physicians, aggregates data on patients across all sources (like lab test results and hospital visits), and includes telehealth features enabling consultations by video. This helps physicians and specialists have more meaningful visits with patients — Clover’s insurance members — and drives better patient outcomes.

The end results are cost savings, lower premiums for the insured, and more income (and faster payment) for care providers. This is a story stock with a lot riding on Clover’s ability to expand into new markets and add more partner care providers to its platform — but even at this early stage of its existence, Clover’s net loss was only $10 million through three quarters of 2020. A clear path to profitability is there for this health insurer as it expands its reach to the tens of millions of potential customers on Medicare.

Massive potential at the intersection of insurance and healthcare

Given that it’s really a healthcare technologist, Clover sees potential to grow into other areas beyond Medicare over time. And since the market encompasses an industry worth trillions a year, Clover’s focus on the intersection of insurance and healthcare — and on disrupting it with technology — makes it an intriguing business.

Personally, I’m waiting to see the report card from the final quarter of 2020 before I make a purchase, but I nonetheless plan on pulling the trigger. As is the case with new positions I take in high-growth companies, I’ll start small (an initial position is usually worth less than 1% of my total portfolio value) since share prices of stocks like this tend to be volatile. This leaves room to buy more (perhaps quarterly) if the journey plays out as Clover hopes it will.

But given the long-term potential, I’m intrigued. If you think healthcare and insurance are ripe for the picking in the next decade, Clover is at the very least worth your consideration.

Technology has some good points, but it still requires us humans