President Donald Trump and his Democratic rival Joe Biden went on offense on Sunday, with each campaigning in states they are trying to flip during the November 3 election that is just over two weeks away.

Trump began his day in Nevada, making a rare visit to church before an evening rally in Carson City. Once considered a battleground, Nevada hasn’t swung for a Republican presidential contender since 2004. 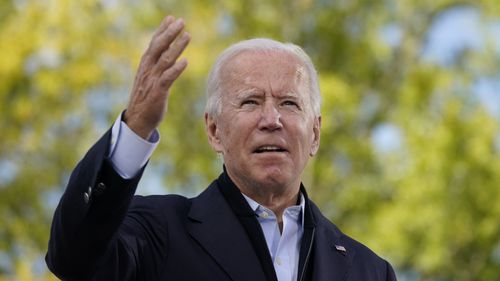 While seated in the front row at the nondenominational International Church of Las Vegas, Trump received blessings from the church’s pastors, with Denise Goulet telling attendees that God told her Trump is the apple of his eye and would secure a second term.

“At 4:30, the Lord said to me, ‘I am going to give your president a second win,'” she said, telling Trump, “you will be the president again.”

Trump offered short remarks, saying “I love going to churches” and that it was “a great honor” to attend the service. 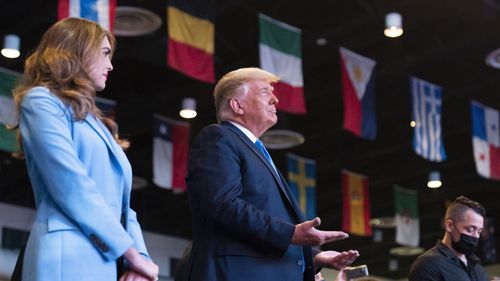 The president also said that “we have a group on the other side that doesn’t agree with us,” and he urged people to “get out there on November 3 or sooner” to vote. He dropped a wad of $20 bills in the collection plate before leaving.

Biden, a practicing Catholic, attended Mass in Delaware before flying to North Carolina, which a Democratic presidential candidate hasn’t won since Barack Obama in 2008.

Each is seeking to make inroads in states that could help secure a path to victory, but the dynamics of the race are remarkably stable.

Biden enjoys a significant advantage in national polls, while carrying a smaller edge in battleground surveys.

But he also has another considerable advantage over Trump: money.

Over the past four months, his campaign has raised over $1 billion, and that has enabled him to eclipse Trump’s once-massive cash advantage.

Biden started his day with mass in Delaware at St Joseph’s on the Brandywine, as he does nearly every week.

He and his wife, Jill, entered wearing dark-colored face masks. She carried a bunch of flowers that including pink roses.

The church is a few minutes’ drive from Biden’s home. Biden’s son Beau, who died of brain cancer in 2015, is buried in the cemetery on its grounds. Joe and Jill Biden visited the grave after the service.

If elected, Biden would be only the second Roman Catholic president in US history and first since John F. Kennedy. Biden speaks frequently about his faith and its importance in his life.