With COVID-19 patients now filling about one-third of the intensive care units in the Paris area, France’s health minister threatened on Thursday to close bars and ban family gatherings, if the situation doesn’t improve.

Intensive care units in other regions of France are also filling up with virus patients, as more than two months of increasing infections have now spread to the country’s elderly and vulnerable populations.

But while other countries have imposed new localized lockdowns to fight rebounding cases, France’s government is taking pains to avoid that and adopting relatively modest localized measures instead. 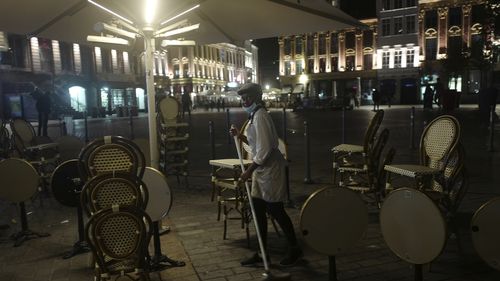 French Health Minister Olivier Veran warned that the government could classify Paris and nearby suburbs as a “maximum alert zone” starting on Monday, leading to measures such as shutting bars and banning “family parties” or other big gatherings.

He didn’t set a limit on group sizes or indicate what the alert zone designation might mean for the French Open, currently under way on Paris’ western edge and open to up to 1,000 spectators per day.

Amid now-daily protests against virus restrictions on French cafes, Veran said restaurants might be able to stay open – if they impose tighter rules.

The maximum alert level means that “the risk of hospital saturation is very high,” Veran said, as authorities unveiled region-by-region data showing that the number of patients in intensive care in some areas is rising faster than the government predicted a month ago.

The situation in the capital is starting to resemble that of the Mediterranean city of Marseille and the French Caribbean island of Guadeloupe, where all restaurants and bars were shut down after the government put them at the maximum alert level last week.

Veran said there are signs that the infection growth is slowing in Marseille, Bordeaux and Nice. But he said it is too early to lift restrictions, and that France overall is still “in the phase of an aggravation of the situation.”

France has been recording more than 10,000 new confirmed cases a day for the past two weeks, and has reported a total of 31,956 virus-related deaths, among the highest tolls in Europe.