Bamby Salcedo, here at a 2017 rally on behalf of LGBTQ rights, is among the plaintiffs in a lawsuit filed Monday to keep Obama-era civil rights protections in place. “Everyone deserves easy access to health care,” Salcedo says, “and health care that is respectful of who we are.” 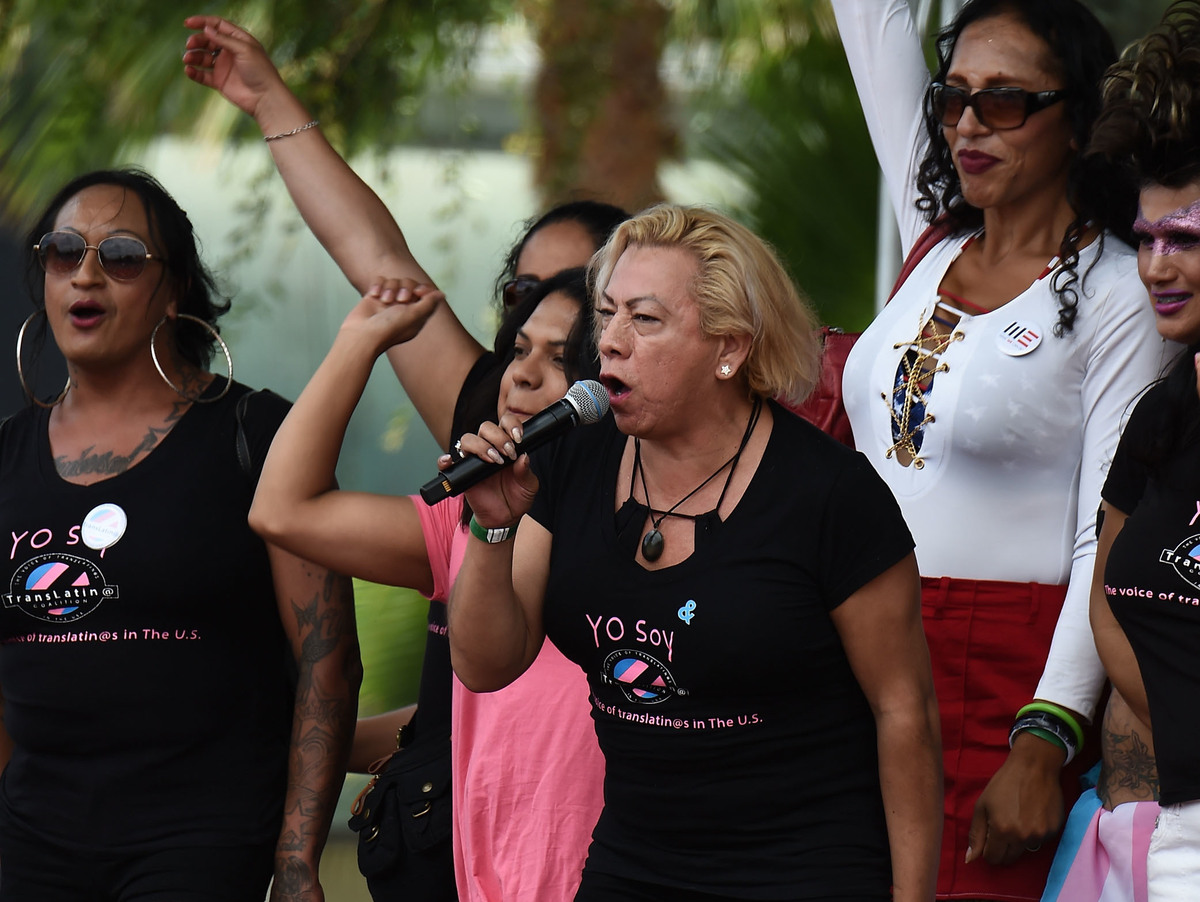 Bamby Salcedo, here at a 2017 rally on behalf of LGBTQ rights, is among the plaintiffs in a lawsuit filed Monday to keep Obama-era civil rights protections in place. “Everyone deserves easy access to health care,” Salcedo says, “and health care that is respectful of who we are.”

A coalition of LGBTQ clinics and organizations are suing to block a Trump administration rule that aims to strip “sex discrimination” protections for transgender people from laws that govern health care. The rule, issued in final form by the Department of Health and Human Services on June 12, is distinct from last week’s landmark U.S. Supreme Court decision that bars discrimination against LGBTQ people in the workplace.

“Everyone deserves easy access to health care, and health care that is respectful of who we are,” says Bamby Salcedo, president and CEO of the TransLatin@ Coalition, one of the plaintiffs in the lawsuit. “This rule will hurt marginalized communities who already experience barriers to care.”

The lawsuit was filed Monday morning in the U.S. District Court for the District of Columbia. The plaintiffs, represented by Lambda Legal and Steptoe & Johnson, include Whitman-Walker Clinic and the Los Angeles LGBT Center, along with individual LGBTQ physicians, health care provider associations, and LGBTQ organizations including the TransLatin@ Coalition.

The challenge to Trump’s health care rule comes just a few days after it was published in the Federal Register, and a week after the U.S. Supreme Court ruled in favor of LGBTQ employees. In a 6-3 decision, the highest court in the country found that “sex discrimination” does protect people who are fired or discriminated against at work for being gay or transgender.

The Supreme Court decision has been hailed as a huge win by LGBTQ advocates and a rebuke to the Trump administration, which has put out a range of rules and regulations that define “sex discrimination” as only applicable when someone faces discrimination for being female or male, and does not protect people from being discriminated against for being LGBTQ.

While the Supreme Court decision on employment discrimination doesn’t have an immediate impact on the health care rule, legal experts say it may make challenges to the rule more likely to succeed.

“It certainly is wind in our sails,” says Lambda Legal Senior Attorney Omar Gonzalez-Pagan. “There’s no doubt that the analysis that [the Trump administration] deployed is inconsistent with the final ruling of the Supreme Court in the employment cases. and it further undermines any rationale that they had.”

The rule being challenged comes from the HHS’ Office for Civil Rights. It addresses nondiscrimination protections laid out in Section 1557 of the Affordable Care Act, the part of that law that established that it is illegal to discriminate on the basis of “race, color, national origin, sex, age or disability in certain health programs and activities.”

In 2016, an Obama-era rule from HHS explained that protections regarding “sex” encompass those based on gender identity, which it defined as “male, female, neither, or a combination of male and female.” But the Trump administration’s rule rolls that language back, leaving only the word “sex.”

Bamby Salcedo of the Trans Latin@ Coalition says the Trump rule gives health care providers “the green light” to discriminate. She says for transgender people, discrimination can start in the receptionist’s office, when they hand over an ID that shows a name and gender that conflicts with how they present themselves. “Even those of us who are lucky to get through the reception and get to see a doctor, we often encounter that the doctor tells us, ‘I don’t treat people like you.’ “

She points to the death of Tyra Hunter in the 1990s. Hunter was a transgender woman injured in a car accident in Washington, D.C., who died after the paramedics stopped treating her when they discovered she was transgender. And a study from several years ago that Salcedo’s organization conducted on the health care needs of transgender people found that fear of mistreatment still drives many to avoid medical care.

COVID-19 Is Now Officially A Pandemic, WHO Says : Goats and Soda : NPR