People stand in line at a Detroit polling place during Michigan’s March 10 presidential primary. Because of the pandemic, the state’s top election official is sending absentee ballot applications to every registered voter for August and November elections. 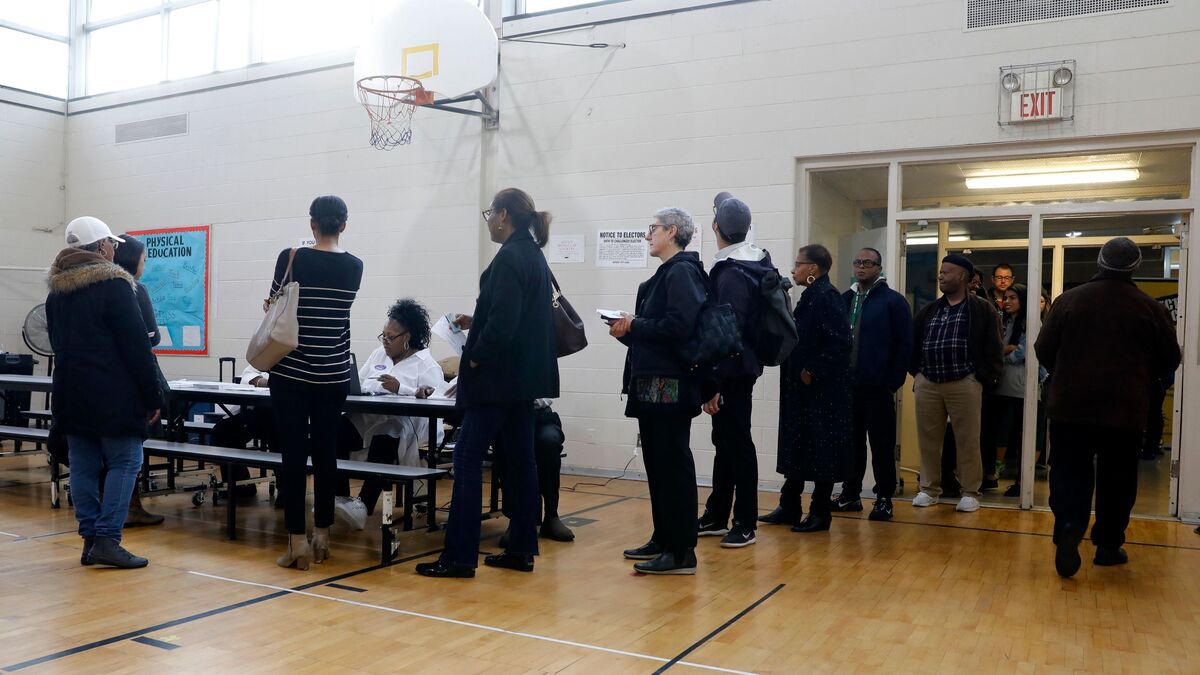 People stand in line at a Detroit polling place during Michigan’s March 10 presidential primary. Because of the pandemic, the state’s top election official is sending absentee ballot applications to every registered voter for August and November elections.

President Trump on Wednesday escalated his rhetorical campaign against an expansion of mail-in voting amid the coronavirus pandemic by threatening federal funding to two states with Democratic governors.

Trump appeared to be set off by an announcement the day before from Michigan’s Democratic secretary of state, Jocelyn Benson, who said her office will mail an absentee ballot application to every voter in the state for August and November elections.

Trump narrowly won Michigan in 2016, giving him the Electoral College votes needed to become president. Trump is expected to visit the state on Thursday to tour a Ford facility that has been repurposed to make ventilators.

In a tweet Wednesday, Trump falsely claimed the state was sending ballots, not ballot applications, and said its federal funding was at risk. The president wrote: “I will ask to hold up funding to Michigan if they want to go down this Voter Fraud path!”

Breaking: Michigan sends absentee ballots to 7.7 million people ahead of Primaries and the General Election. This was done illegally and without authorization by a rogue Secretary of State. I will ask to hold up funding to Michigan if they want to go down this Voter Fraud path!..

In a subsequent tweet, Trump made a similar threat to Nevada, which is mailing absentee ballots to all active registered voters for the state’s June 9 primary — an all-mail election.

Elections are run by state and local governments, and it’s unclear what legal means Trump would have to withhold funds from the states.

Benson, the Michigan secretary of state, responded to Trump’s tweet noting that a number of states are taking the same action, including states with Republican election officials. In a statement, she added that absentee ballot “applications are mailed nearly every election cycle by both major parties and countless advocacy and nonpartisan organizations.”

Hi! 👋🏼 I also have a name, it’s Jocelyn Benson. And we sent applications, not ballots. Just like my GOP colleagues in Iowa, Georgia, Nebraska and West Virginia. https://t.co/kBsu4nHvOy

When asked by a reporter on a call Monday what she thought about proposals to send absentee ballot applications to all voters, she said: “Personally, I don’t really have an issue with absentee ballot request forms being sent out to voters as much as ballots being sent directly to voters. … We are really against, when people talk about mail-in voting, the ballots being sent directly to people who may or may not want them or sent to all the registered voters even when their voter rolls have not been cleaned up.”

Trump’s objections come despite the fact that he voted by mail in Florida’s recent primary and has voted absentee in previous elections.

Research has found there’s no evidence that expanding absentee voting benefits one party over the other. Likewise, extensive research suggests voter fraud is uncommon for mail-in voting.

Still, Trump and some of his Republican allies have concluded that it helps Democrats and are trying to restrict its expansion amid the pandemic.

But the push comes at a moment when many Americans are fearful of voting in person for fear of contracting the coronavirus. Sixty percent of those surveyed in a recent AP-NORC poll said Americans should be allowed to vote absentee without an excuse if the pandemic is still a problem in November.

Wisconsin officials say at least 71 cases of COVID-19 are associated with people who went to the polls in person in that state’s controversial April 7 election, where thousands of voters had to wait in line to cast ballots after Republicans in the state legislature refused to support efforts to expand mail-in voting.

Some of the Republican officials who have expanded absentee voting in their states have faced suspicion from within their own party about those efforts.

“The biggest challenge I have right now is making the concept of absentee voting less toxic for Republicans,” Kentucky Secretary of State Michael Adams, a Republican, recently told NPR. His office is sending postcards to every registered voter telling them how to apply for an absentee ballot.

Meanwhile, a federal court in Texas ruled Tuesday evening that voters there could cite fear of contracting the virus as a legitimate excuse for requesting an absentee ballot. The state has among the strictest requirements in the country for voting absentee, which is generally only available for those over age 65, who have a disability or illness, or will be out of the state during the election.

State officials are hostile to efforts to expand mail-in voting, and Texas Attorney General Ken Paxton vowed to appeal the decision to the U.S. 5th Circuit Court of Appeals.

With reporting by NPR’s Pam Fessler