You can exhale, Michigan football fans.

Sure, the Wolverines’ 24-21 double-overtime victory against Army was ugly. And, sure, you’ve got more questions about Josh Gattis’ “Speed in Space” offense than you had entering the season. 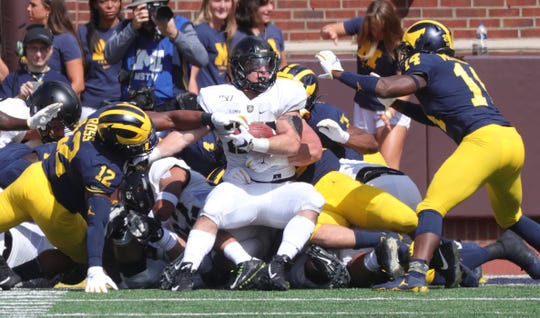 Army, who is being paid $1.5 million for today’s game at the Big House, is beating Michigan 14-7 at the half.

Michigan trailed Army 14-7 at halftime, fumbled four times, rallied in the second half and avoided becoming the second Power 5 program this season to spend big and get beat. (In Week 1, Tennessee lost to Georgia State after a $950,000 payout.)

Even with a win, that’s a lot of money to scare the hell of Michigan fans.

And, boy, were they scared.

Army struggled to put away Rice in Week 1, but on Saturday the Black Knights looked more than capable of beating the preseason favorite in the Big Ten.

Here are some of the more amusing reactions from social media:

The only thing Michigan fans are thinking about at halftime of this Army game pic.twitter.com/Khe1I0Hqlu

Michigan does give us the best “Agony of defeat” pics.. pic.twitter.com/HmGZE2eZdx

Michigan trying to hold on to the football: pic.twitter.com/mXkDQKSVEG

Imagine being a Michigan fan and having to watch that first half, then during halftime having to listen to Urban Meyer talk about it.

So, how is offensive coordinator Josh Gattis doing in his first season at Michigan?

Update on the “Was it Locksley or Gattis running the Alabama offense” debate: Maryland has 42 in the first half today against Syracuse. Michigan has 7 against Army.

Army at Oklahoma, 2018, was a lot more about Army playing as well as it possibly could on offense.

Army at Michigan, 2019, is a lot more (through 3 quarters) about Michigan leaving a ton to be desired on offense.

What a STOP by Army 💪

Michigan gets stuffed on 4th & 2 in the red zone. 👀 pic.twitter.com/xu7gxN2ihO

The Michigan offense has become more one-dimensional than Army’s. Which is basically impossible.

The game went to overtime after Army missed a would-be winner:

Army and Michigan are going to OT after this missed field goal pic.twitter.com/ZPqXowa5UA

And then there’s this: