At today’s average oil price of $60 per barrel for Brent crude, that’s $5.8 billion consumed. Every. Day. 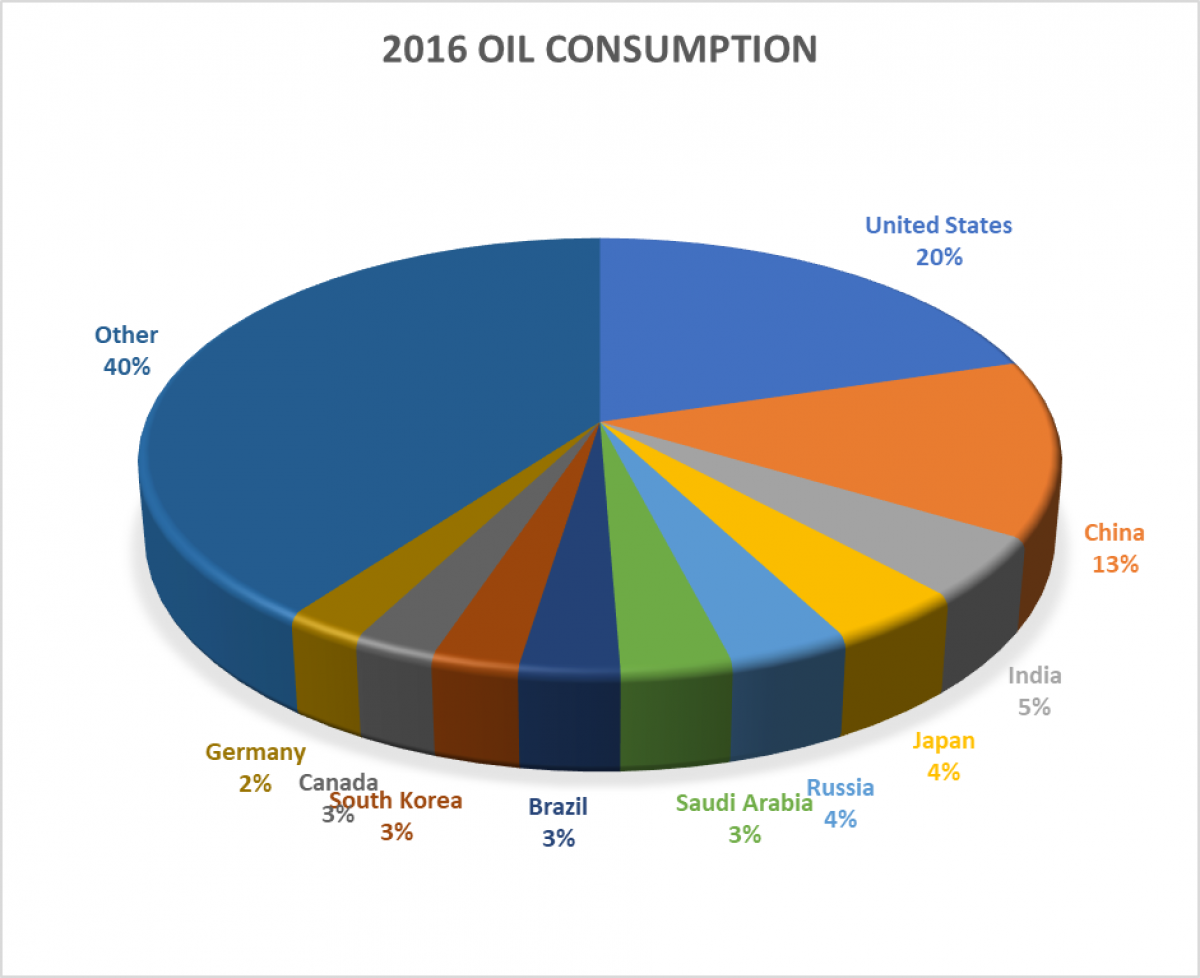 But that’s just the current daily average based on EIA data from 2016. Today, estimates are that we are chewing through 100 million barrels per day or more. But that hasn’t always been the case.

According to BP’s Statistical Review of World Energy, consumption has been on a steep uphill trajectory for decades, starting at about 40 million barrels per day consumed in 1969. 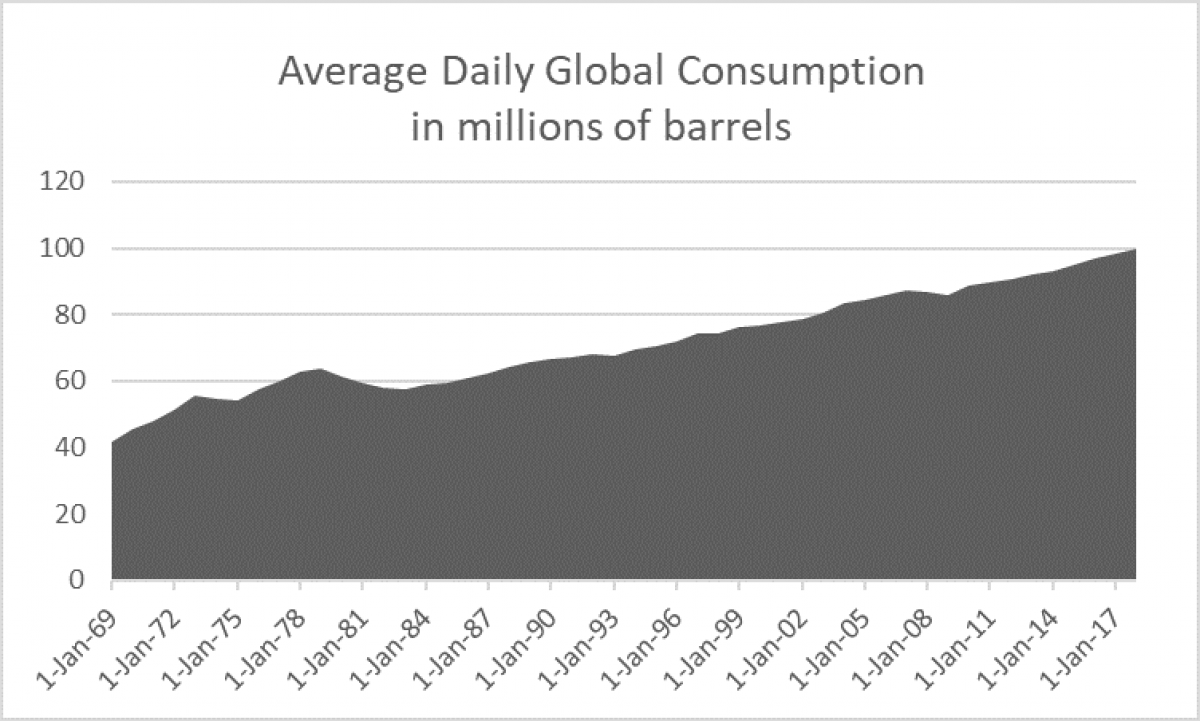 That’s the average daily rate. Annually, global consumption is even more impressive, reaching 36.4 billion barrels consumed in 2018, according to BP. That’s $2.184 trillion worth of oil consumption in a single year. In gallons, the world’s annual consumption is 1.134 trillion—roughly half the amount of water found in Lake Michigan. 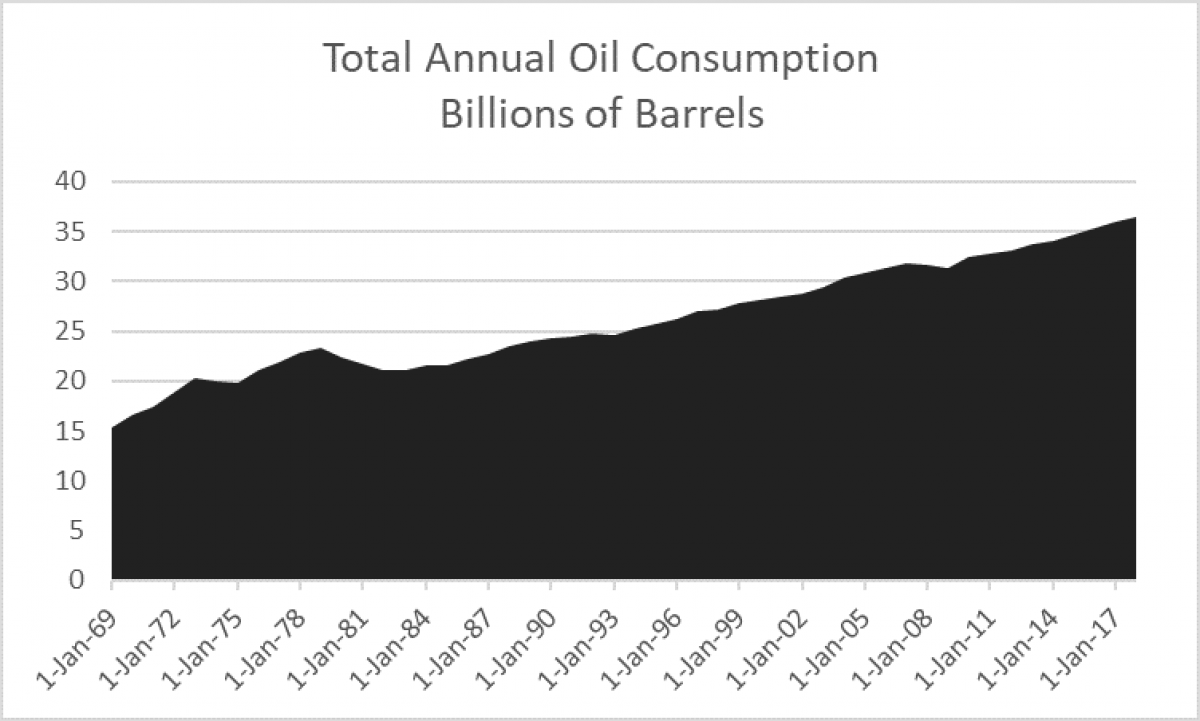 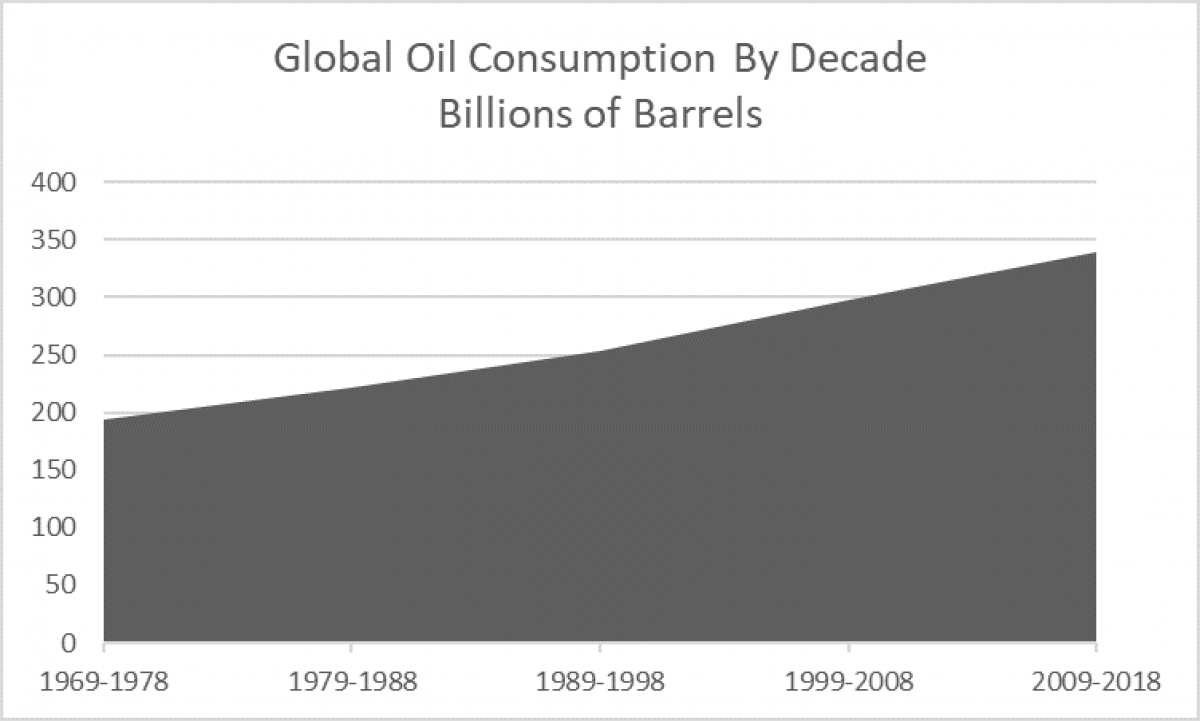 But what about the period before 1969? That data, while certainly less significant in the grand scheme of things because we’re talking about significantly less volume, is harder to track down. For the early years, production data is easier to come by, which is a reasonably fair substitution for consumption since you can’t consume what you didn’t produce, and producers wouldn’t produce barrels that are not being consumed. Related: Shale Bleeds Cash Despite Best Quarter In Years 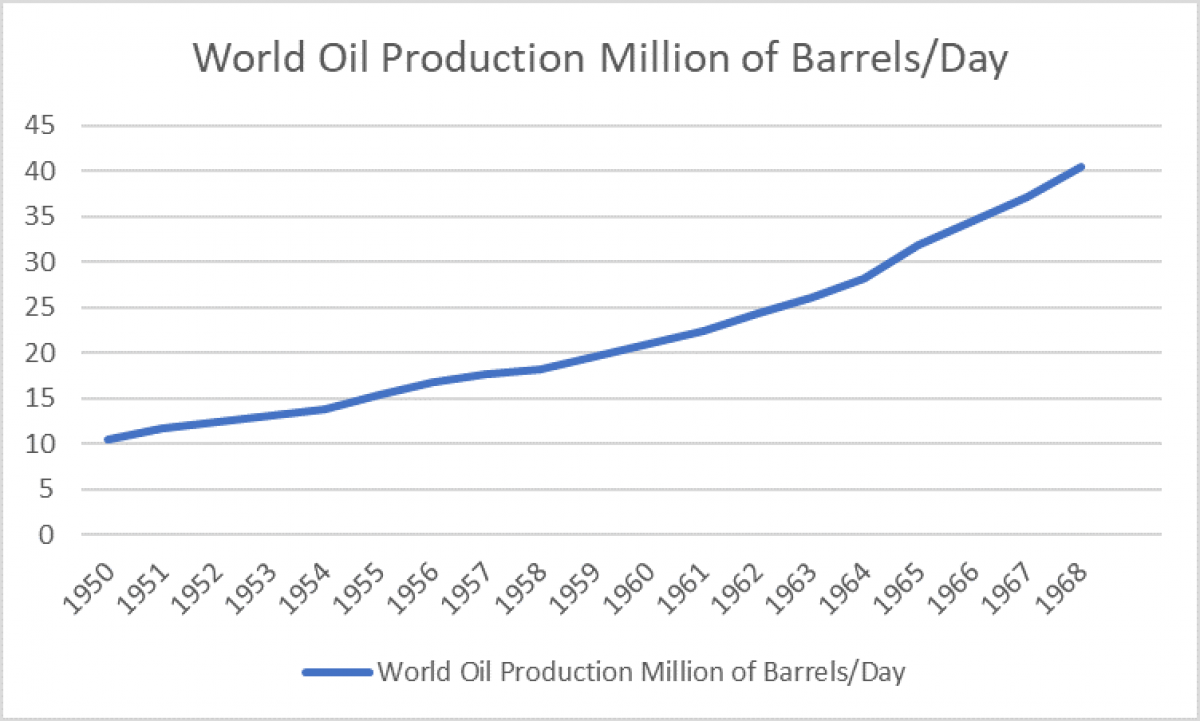 Unfortunately, the world’s record-keeping ability was a bit inferior to today’s methods. Not every producing country kept good tabs on the amount of oil it pumped out of the ground, and even fewer countries kept good records on how much oil it consumed. For this reason, estimates for how much oil the world was consuming prior to 1950 vary wildly. And clearly, the record-keeping ability is worse the farther you go back in history. And to figure out how much oil the world has consumed, you’d have to get into your Way Back machine to 1850.

In 2008, a pair of chemists from the Academy of Sciences estimated that the world had pumped 100 billion tonnes of crude. This equates roughly to 733 billion barrels of oil. We can assume that this estimation including production through 2007.  From 2008 to 2018, the world has used an additional 371.2 billion (BP), which would bring the total oil used since the beginning of time to 1.104 trillion—below the usage of 1.457 trillion barrels in the calculations above, derived from multiple sources. 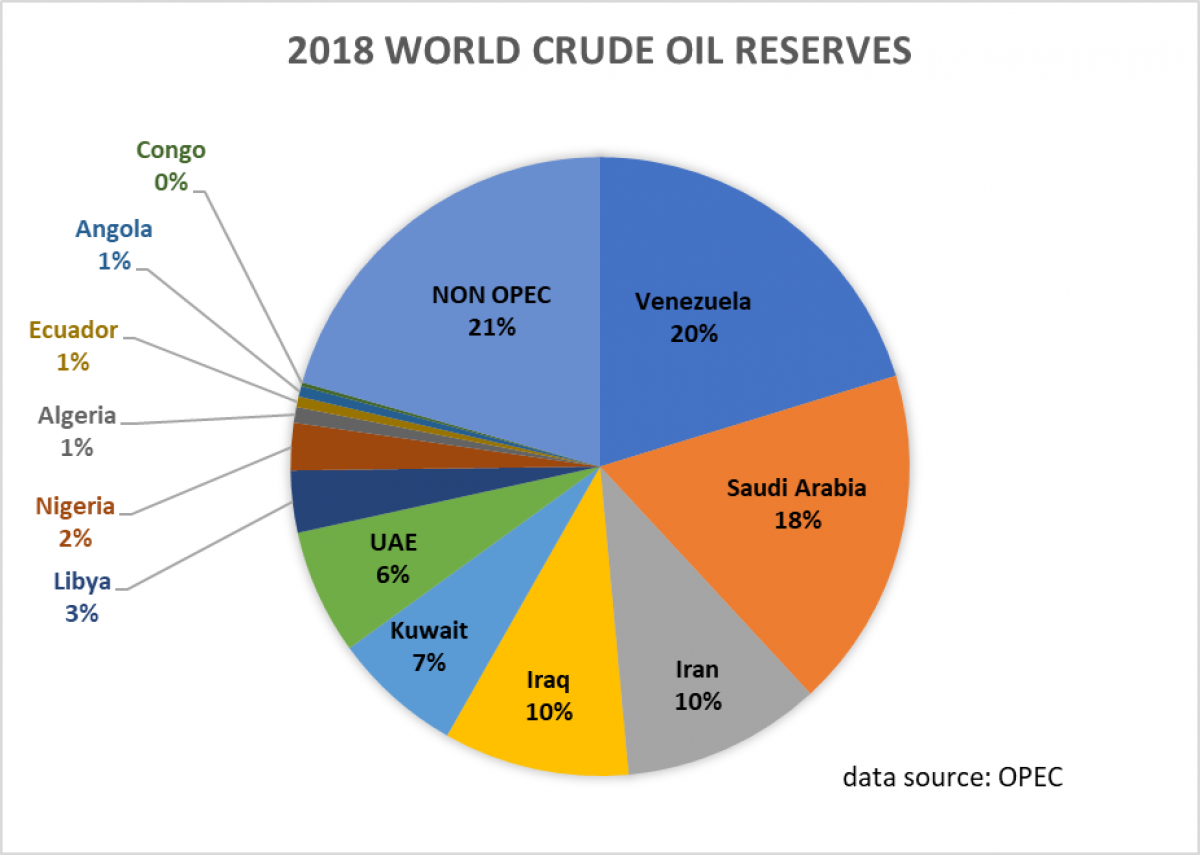 But using the estimates above, if we’ve used somewhere between 1.1 trillion and 1.5 trillion barrels of oil since the beginning of time, what’s next?

To compare this to how much oil the world has left in reserve, as of 2018, the world has 1.497 trillion barrels of oil, according to OPEC, with 79.4% of those reserves held in OPEC countries, and 64.5% of OPEC’s reserves are located in the Middle East. Venezuela and Iran—two sanctioned countries—together hold 30% of OPEC’s reserves. Nigeria and Libya—who also have had security risks that have hindered production–hold another 5%, This puts 35% of the world’s oil at risk of staying in the ground.

But while OPEC holds the lion’s share of the world’s oil, over the next decade, most of the new oil supply will come from the United States.

By Julianne Geiger for Oilprice.com