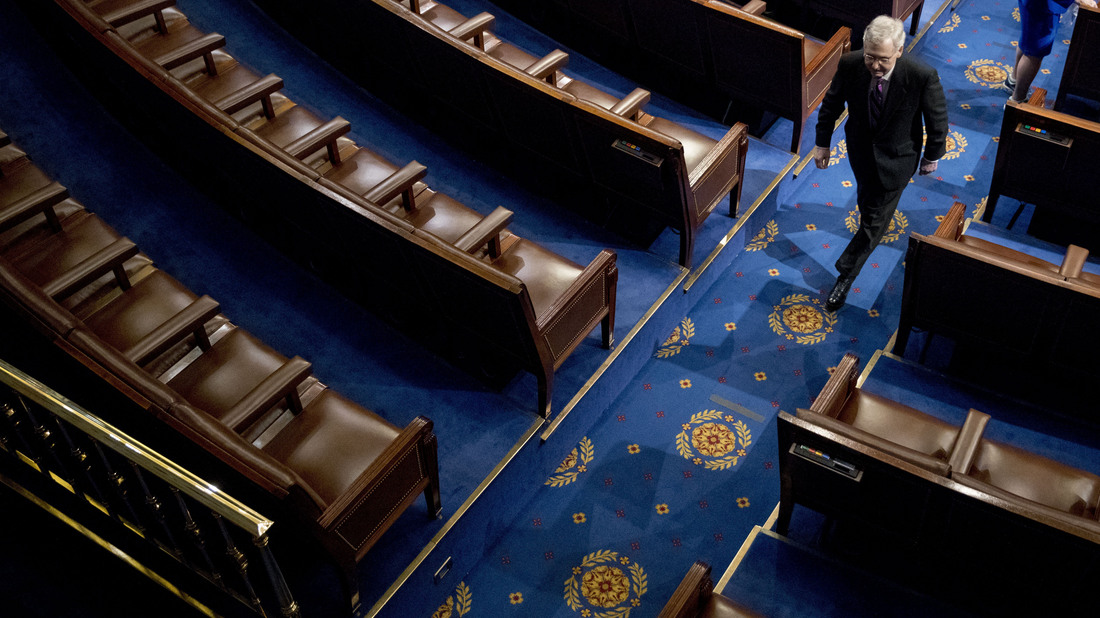 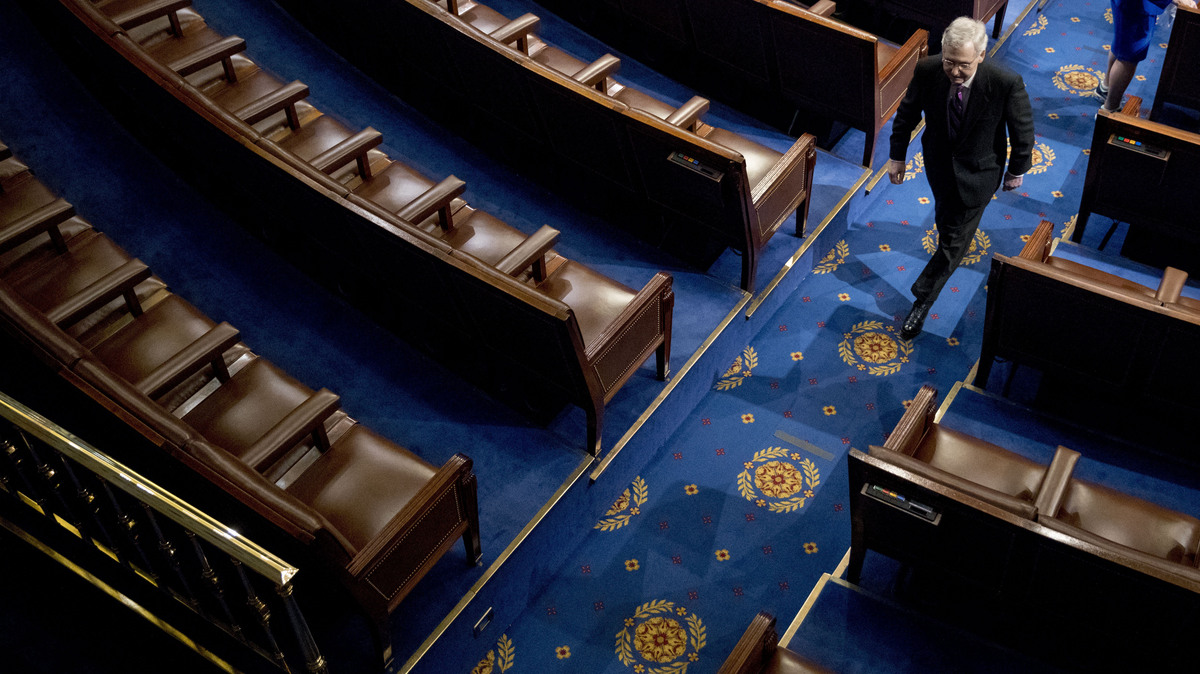 “How does one man have so much power?”

One hears that question asked in Washington a lot these days, often with exasperation and bewilderment.

And it is not always a reference to President Trump.

Quite often, the man in question is Mitch McConnell, the Republican senator from Kentucky.

The man who calls himself the “Grim Reaper” — of signature Democratic initiatives.

McConnell’s status stems from his office as the Senate majority leader -– elected by his party colleagues to lead their conference in the chamber. But few who have held this office before have been able to wield it with this kind of results.

In today’s Senate, McConnell can decide virtually by himself what the chamber will do — and even what it will consider doing.

You may have first noticed McConnell early in 2016 when he proclaimed the Senate would not consider any nominee appointed by President Obama to fill the Supreme Court seat vacated by the death of Antonin Scalia. McConnell made this announcement on his own, within hours of Scalia’s death.

In each of these instances, the question arose: How can one man make this kind of momentous decision and make it stick?

McConnell is a master of Senate procedure and rules. He is also a remarkable politician, as NPR reporters have detailed for decades and as Kelly McEvers has documented in her five-part series on the NPR Embedded podcast this summer.

Emerging bosses of the Senate

But how much of McConnell’s power comes from his position as majority leader?

How big a deal is the job itself? Through most of our history, there wasn’t one. And since the office was created a century ago, its occupant has typically been little known outside of Washington.

Everyone knows the most powerful member of the House is the speaker, a title that is found in the first Article of the U.S. Constitution (as written in 1787). Successive generations have rewritten the definition somewhat, but the position remains enormously influential for its power to bring bills to the floor or ignore them.

The founding fathers saw the Senate as a small body (initially just two dozen) that would largely govern itself, under the watchful eye of the president of the Senate – a job assigned to whomever happened to be vice president of the United States. If the veep was unavailable, the task of presiding passed to a senator designated as the Senate president pro tempore — the presiding officer for the time being.

As the Senate evolved, the idea of the presiding officer atrophied in importance. The vice president stopped attending Senate sessions except for ceremonial occasions or to cast a tie-breaking vote. The Senate was largely run by its strongest personalities and committee chairmen.

The job of official majority or minority leader in the Senate did not even exist until about a century ago, in the era around the First World War when the Constitution had just been changed to elect senators by popular vote rather than by state legislators.

The Democrats started designating a leader in 1920. Republicans had an acknowledged leader at the time in Henry Cabot Lodge of Massachusetts, but they did not officially designate one until the mid-1920s.

Since then, the elected leaders of the majority and minority parties have been the titular bosses – although largely beholden to the barons of the committee structure and other individual senators of importance. 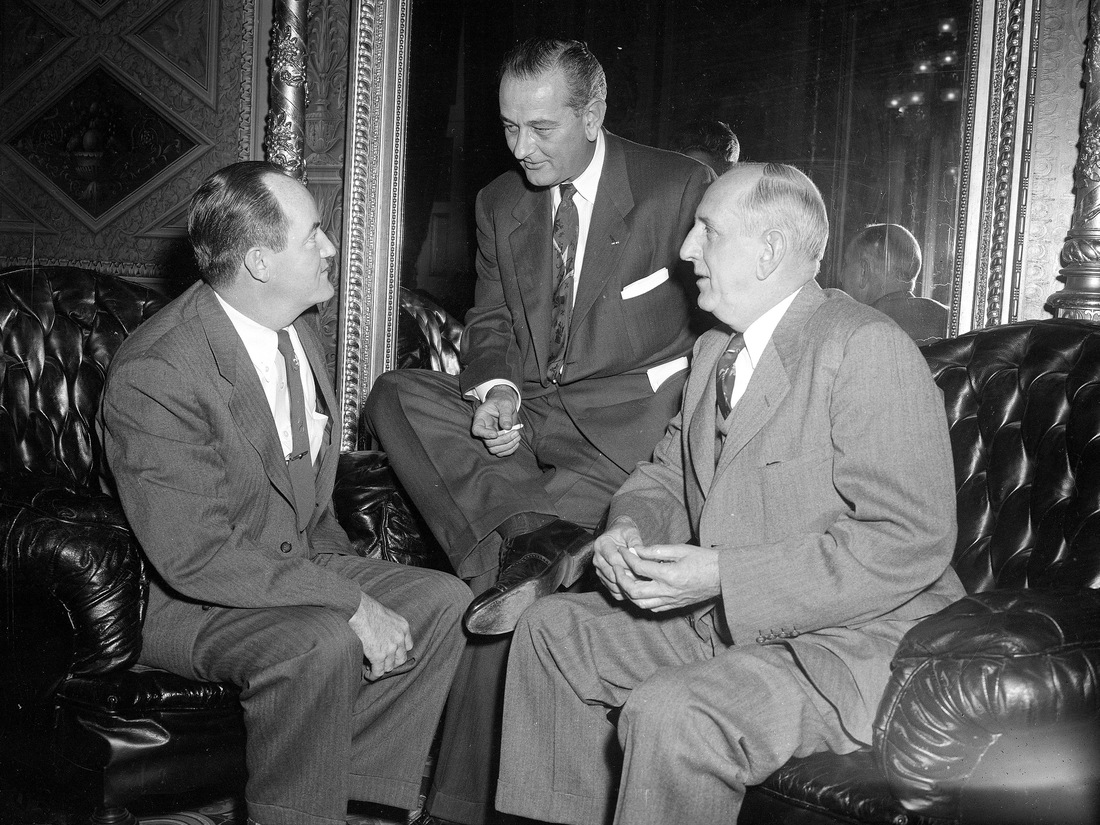 Sen. Lyndon Johnson, center, confers with Sen. Hubert H. Humphrey, left, and Sen. Richard B. Russell in 1954. Johnson was elevated to majority leader in 1955, and rapidly grew into the job. 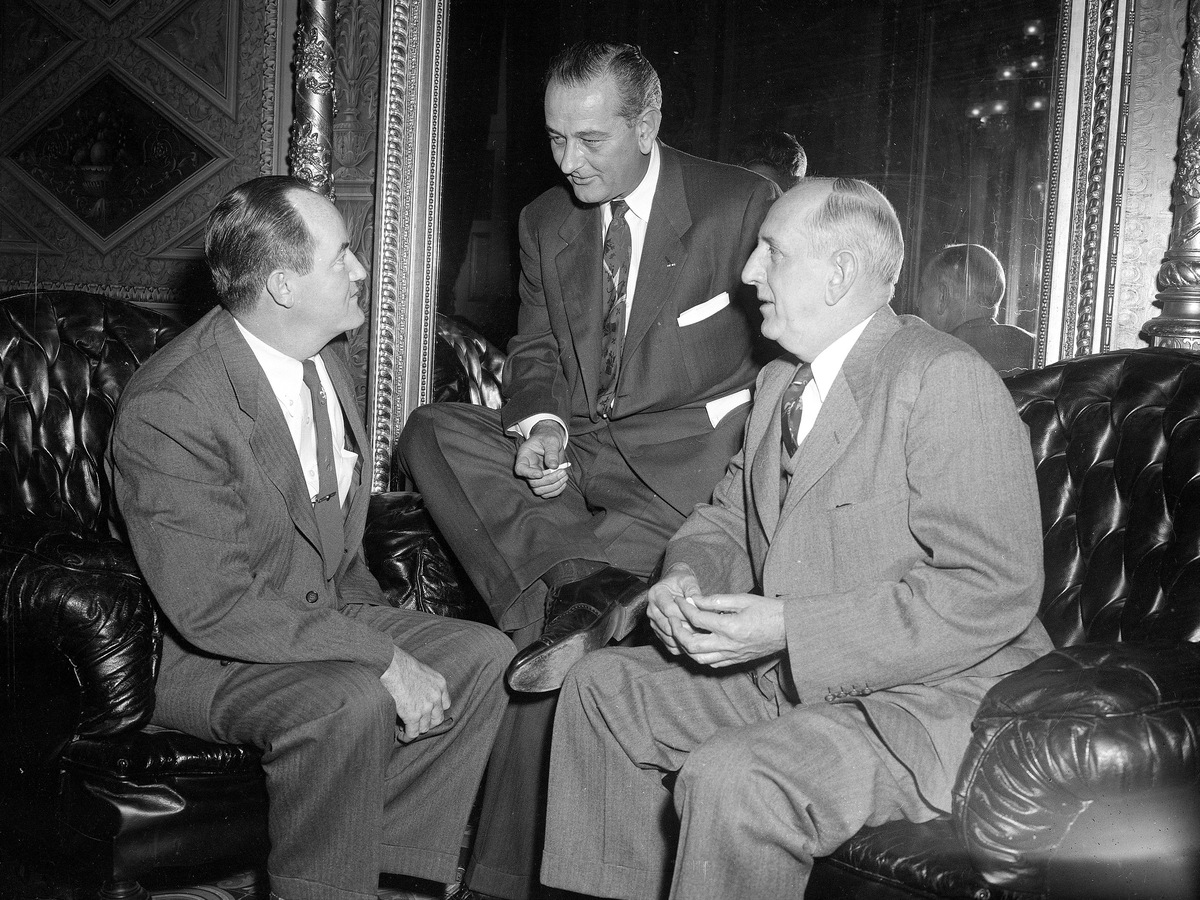 Sen. Lyndon Johnson, center, confers with Sen. Hubert H. Humphrey, left, and Sen. Richard B. Russell in 1954. Johnson was elevated to majority leader in 1955, and rapidly grew into the job.

A sea change of sorts came with the elevation of Lyndon B. Johnson of Texas to the majority leader’s post in 1955. Johnson had only been in the Senate for one term at the time, but had the backing of the venerable Richard Russell of Georgia (the Dixie Democrat for whom the original Senate Office Building is named). Johnson grew rapidly in the job, finding it possible through force of personality and persuasion to move the Senate – including its notorious bloc of Southern segregationists.

When LBJ left to become vice president in 1961, the job passed to Mike Mansfield of Montana, who held it for 16 years through the civil rights bills, Vietnam war and Watergate investigation. His successor was Robert C. Byrd of West Virginia, who wound up being the longest serving senator in history and the party leader from 1977 to 1989.

Illinois Sen. Everett Dirksen, also commemorated in a Senate Office Building, led the GOP from 1959 to his death in 1969 and left a legacy of eloquence and moderation. But he never got to be majority leader. His son-in-law, Howard Baker of Tennessee, led the GOP in the majority during the important first term of Ronald Reagan’s presidency.

Others have also left a mark in a relatively short time in the job. Many Republicans still revere Robert A. Taft, who had the job for just six months before his death in 1953. George Mitchell of Maine was widely admired for his execution of the job for the Democrats for six years, four under President Bill Clinton.

More recently, the job had passed from one able and ambitious politician to another without much change in its status. It came to be mocked by some as “the majority follower,” as some who had the job struggled mightily to form consensus within their ranks. Some have also found being the leader was hazardous to their political health back home, or hobbling for their presidential ambitions.

McConnell’s tenure in the leader position

McConnell’s predecessor as Republican leader was Bill Frist of Tennessee. He got the job suddenly and unexpectedly when Trent Lott of Mississippi resigned.

A distinguished heart surgeon, Frist had not been in leadership before and never seemed at ease in the job. But he benefited by having a more seasoned deputy, Mitch McConnell, who then stepped up to be the party’s No. 1 upon Frist’s retirement in 2007. He has held that spot since.

So McConnell’s current power is not inherent in his title. Nor is he so personally compelling that he bends the will of others to his own in the manner of LBJ.

McConnell has his remarkable power in the nation’s affairs right now because his own position has become a pivotal nexus for other forces in Republican politics.

The election of President Trump in 2016, the loss of the party’s majority in the House in 2018, the extraordinary cohesiveness of the Republican Senate in its public support of the president and the sense of momentous demographic and social change coming in the decades ahead have made the job of Senate majority leader more important. It is now perhaps more important to the GOP than ever before. 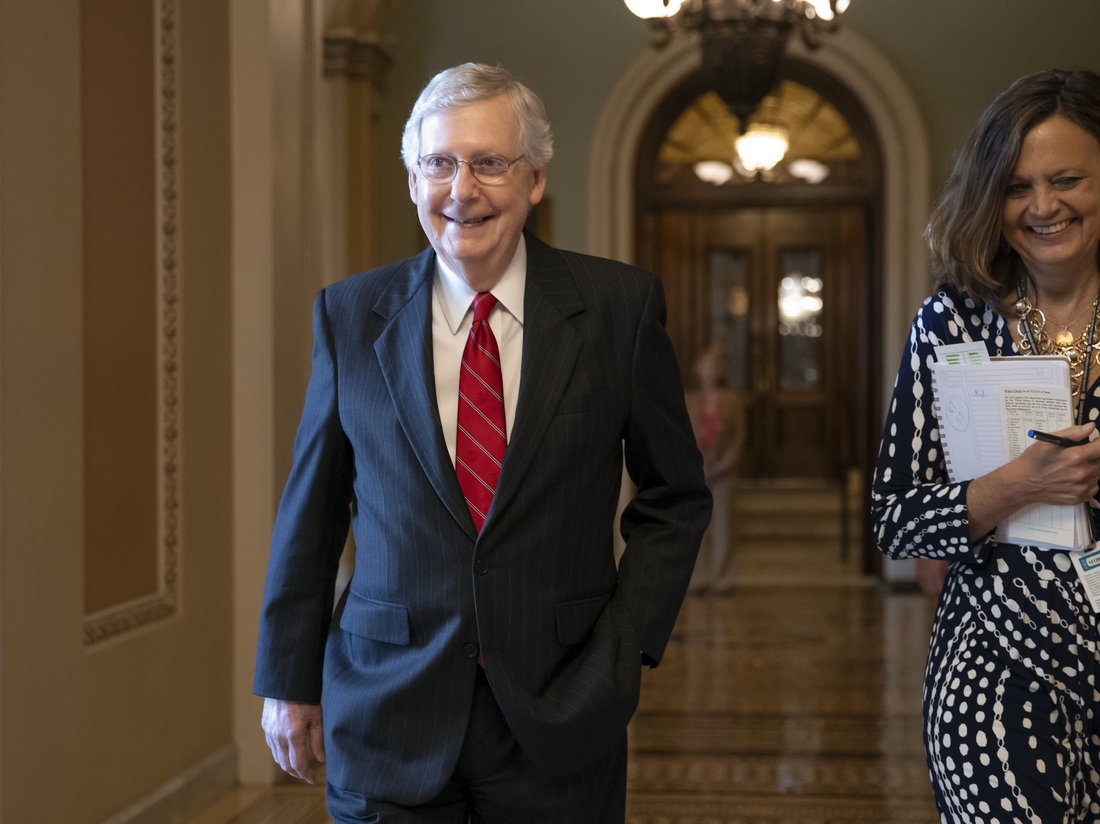 Senate Majority Leader Mitch McConnell, R-Ky., has been able leverage changes to Senate rules and a united Senate GOP conference to steer the president’s agenda — chiefly the confirmation of a record number of judicial nominees. 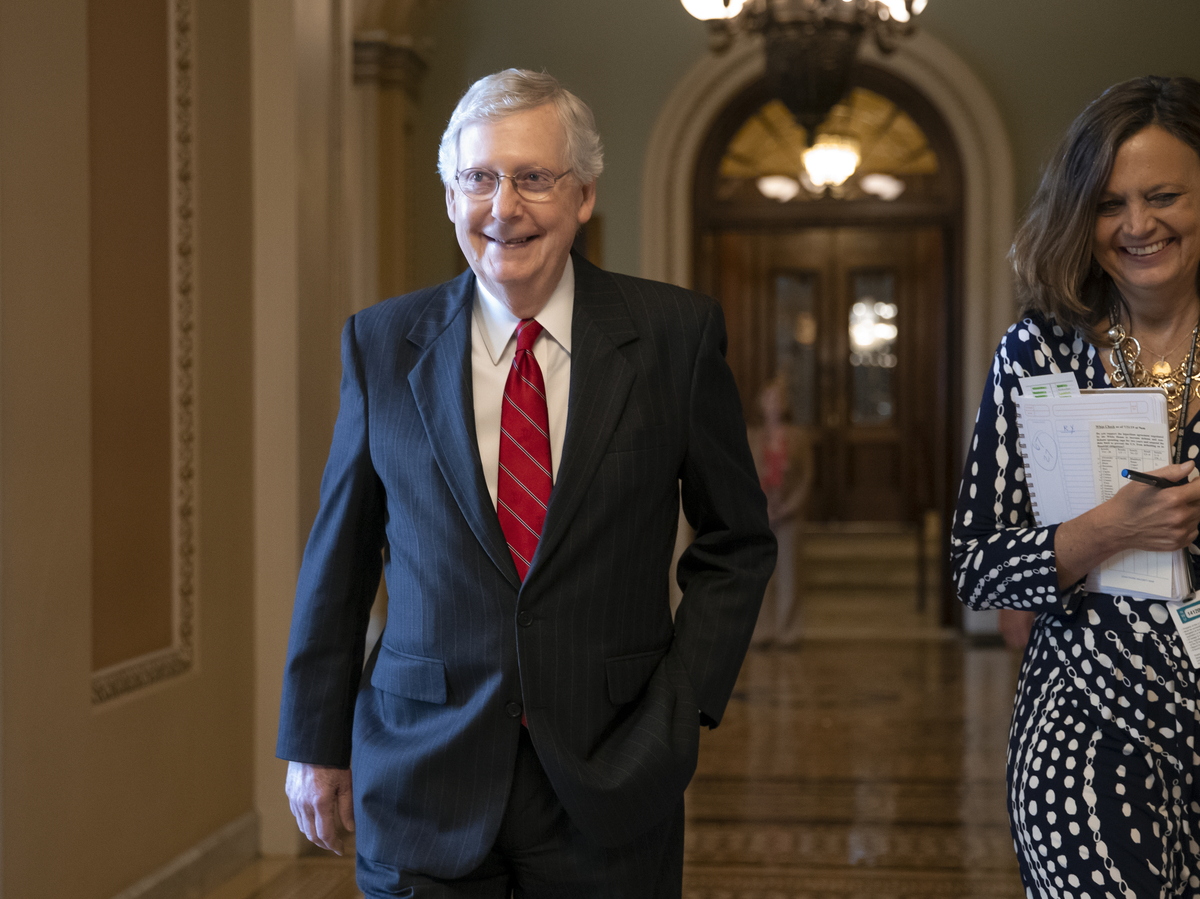 Senate Majority Leader Mitch McConnell, R-Ky., has been able leverage changes to Senate rules and a united Senate GOP conference to steer the president’s agenda — chiefly the confirmation of a record number of judicial nominees.

The most evident of these is, of course, the election of President Trump. McConnell was not onboard the Trump train in the early stages of the 2016 cycle. He officially backed Rand Paul, the Republican junior senator from his own home state. When Paul dropped out, McConnell stayed neutral. He was critical of Trump at times but did not join the active resistance to his nomination.

Control of the Senate was very much up for grabs in the 2016 cycle, and, at times, it appeared likely Trump would lose to Hillary Clinton and depress Republican turnout in the process. That was seen as damaging or even fatal to the prospects of several Republicans in close races.

McConnell could see his status in the majority slipping away after having it just two years. So he calibrated his responses to campaign events carefully. At one point, he simply refused to take any questions at all regarding the party’s presidential nominee.

Nonetheless, when Trump won, McConnell was right there to offer his full-throated support. And within days, the new relationship was cemented by Trump’s appointment of McConnell’s wife, Elaine Chao, as secretary of transportation. (Chao had been secretary of labor for all eight years of George W. Bush’s presidency.)

While their backgrounds and lifetime experiences are worlds apart, McConnell and Trump share an approach to politics that is more transactional than ideological. Both embrace a robust form of free market capitalism, with incentives for business emphasized over taxes and regulation. But like Trump, McConnell has found success as an organizer of political energy and power more than as a thought leader.

McConnell was not able to deliver the clean repeal of Obamacare that Trump wanted, but blame for that fell on the late Sen. John McCain, whose dramatic thumbs down doomed the repeal in 2017. McConnell did, however, get credit for steering the big tax cut through the Senate labyrinth later that year.

And McConnell has been crucial in securing the single clearest accomplishment of the Trump presidency to date – the confirmation of more than 130 federal judges, including two Supreme Court justices.

McConnell has been able to establish a veritable assembly line for judicial confirmations because he disarmed the Democratic minority by changing the rules of the Senate. He first eliminated the use of extended debate – or filibuster – to delay or defeat nominees to the Supreme Court. (Democrats had left the filibuster in place for the Supreme Court when they eliminated it for other presidential appointments such as cabinet members.)

Then, McConnell changed the procedures for processing other judicial appointments, procedures Republican senators had used to hold up scores of judicial nominees during the Obama presidency (leaving open the very vacancies that Trump and McConnell have since filled).

None of this would be possible, of course, without the remarkable degree of cohesion and loyalty McConnell has commanded within his own party in the Senate. While individual Republicans have at times complained privately about the president or the majority leader, they have stood by the two of them on virtually every vote since the Obamacare failure. An exception that tends to prove the rule was the Senate vote to block certain arms sales to Saudi Arabia. The president vetoed that, and the Senate upheld his veto.

The latest example was the Senate’s acquiescence in passing the two-year budget deal that suspended the debt ceiling until 2021 and lifted caps on both military and domestic spending. The bill required conservative Republican senators to swallow more than $1 trillion in new debt in each of the next two budget years, and the high likelihood of still higher deficits thereafter. Moreover, the administration had negotiated it primarily with Speaker Nancy Pelosi.

Yet, when the time came for the crucial vote, McConnell delivered enough Republicans to get it done.

Another example of how the Trump era, at least on Capitol Hill, is best understood as the Trump-McConnell era.

The US is finally evacuating Americans from the Diamond Princess. Here’s why that’s made them mad