Attorney General Mike Hunter begins closing statements during the opioid trial at the Cleveland County Courthouse in Norman, Okla. on Monday, July 15, 2019. It was the first public trial to emerge from roughly 2,000 U.S. lawsuits aimed at holding drug companies accountable for the nation’s opioid epidemic. 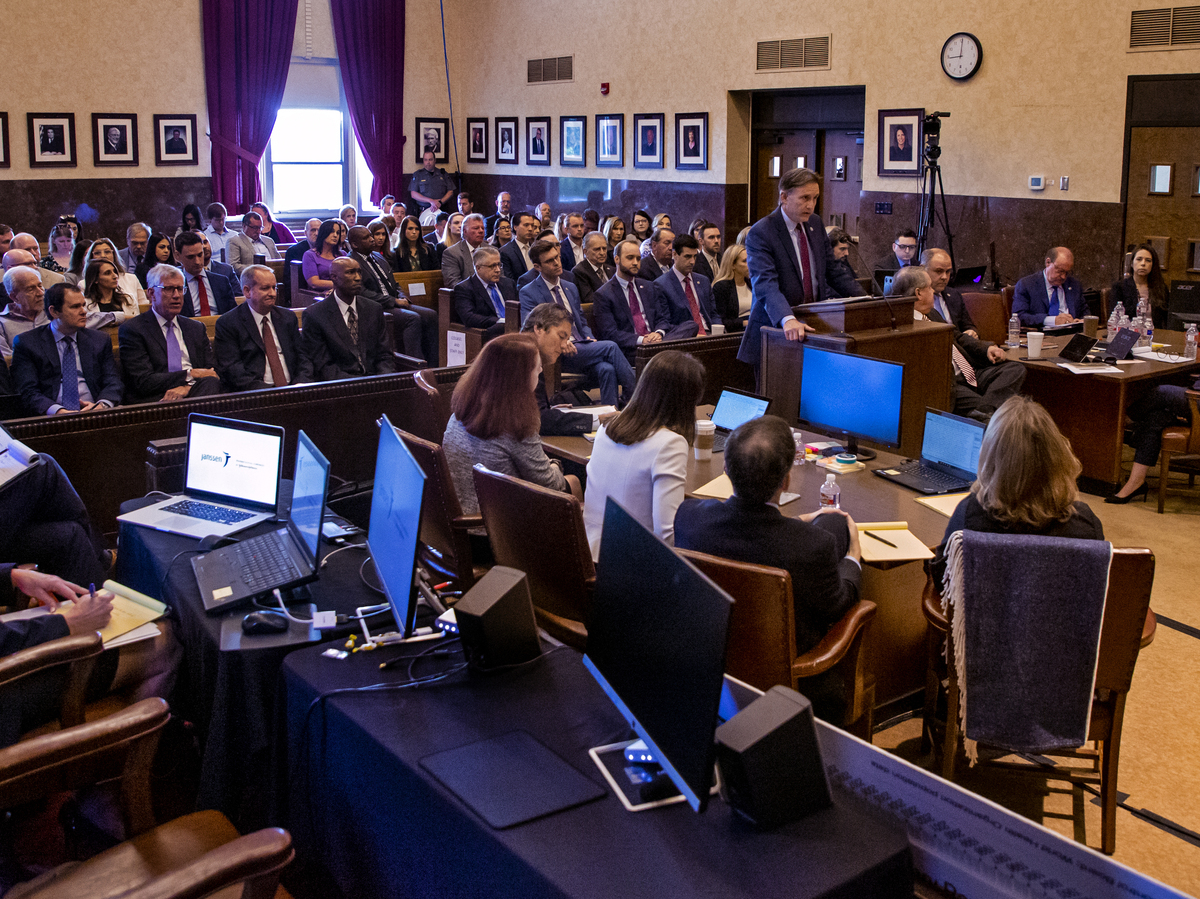 Attorney General Mike Hunter begins closing statements during the opioid trial at the Cleveland County Courthouse in Norman, Okla. on Monday, July 15, 2019. It was the first public trial to emerge from roughly 2,000 U.S. lawsuits aimed at holding drug companies accountable for the nation’s opioid epidemic.

A global megacorporation best known for Band-Aids and baby powder may have to pay billions for its alleged role in the opioid crisis. Johnson & Johnson was the sole defendant in a closely-watched trial that wrapped up in Oklahoma state court this week, with a decision expected later this summer. The ruling in the civil case could be the first that would hold a pharmaceutical company responsible for one of the worst drug epidemics in American history.

The trial took place over seven weeks in the college town of Norman. Instead of a jury, a state judge heard the case.

During closing arguments Monday, Hunter called the company the “kingpin” of the opioid crisis.

“What is truly unprecedented here is the conduct of these defendants on embarking on a cunning, cynical and deceitful scheme to create the need for opioids,” Hunter said.

The state urged Judge Thad Balkman, who presided over the civil trial for seven weeks, to find Johnson & Johnson liable for creating a “public nuisance” and force the company to pay more than $17 billion over 30 years to abate the public health crisis in the state.

Driving the opioid crisis home has been a cornerstone of the Oklahoma’s lawsuit. In closing arguments Monday, one of the state’s attorneys, Brad Beckworth, cited staggering prescribing statistics in Cleveland County, where the trial took place.

“What we do have in Cleveland County is 135 prescription opioids for every adult,” Beckworth explained. “Those didn’t get here from drug cartels. They got here from one cartel: the pharmaceutical industry cartel. And the kingpin of it all is Johnson & Johnson.”

Johnson & Johnson’s attorney Larry Ottaway, rejected that idea in his closing argument, saying the company’s products, which had included the fentanyl patch Duragesic and the opioid-based pill Nucynta, were minimally used in Oklahoma.

He scoffed at the idea that physicians in the state were convinced to unnecessarily prescribe opioids due to the company’s marketing tactics.

“The FDA label clearly set forth the risk of addiction, abuse and misuse that could lead to overdose and death. Don’t tell me that doctors weren’t aware of the risks,” Ottaway said. 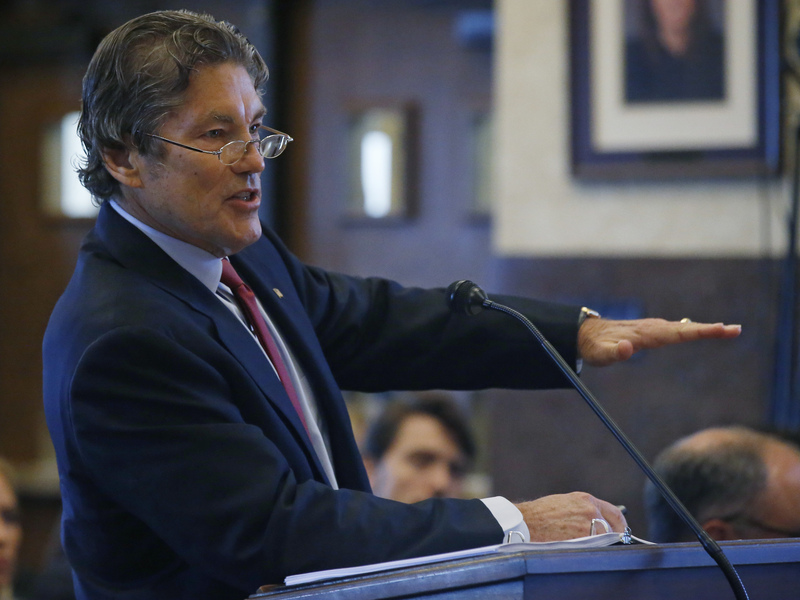 Defense attorney Larry Ottaway speaks on behalf of his client Johnson & Johnson during closing arguments. Oklahoma is asking a state judge for $17.5 billion to help pay for addiction treatment and prevention. 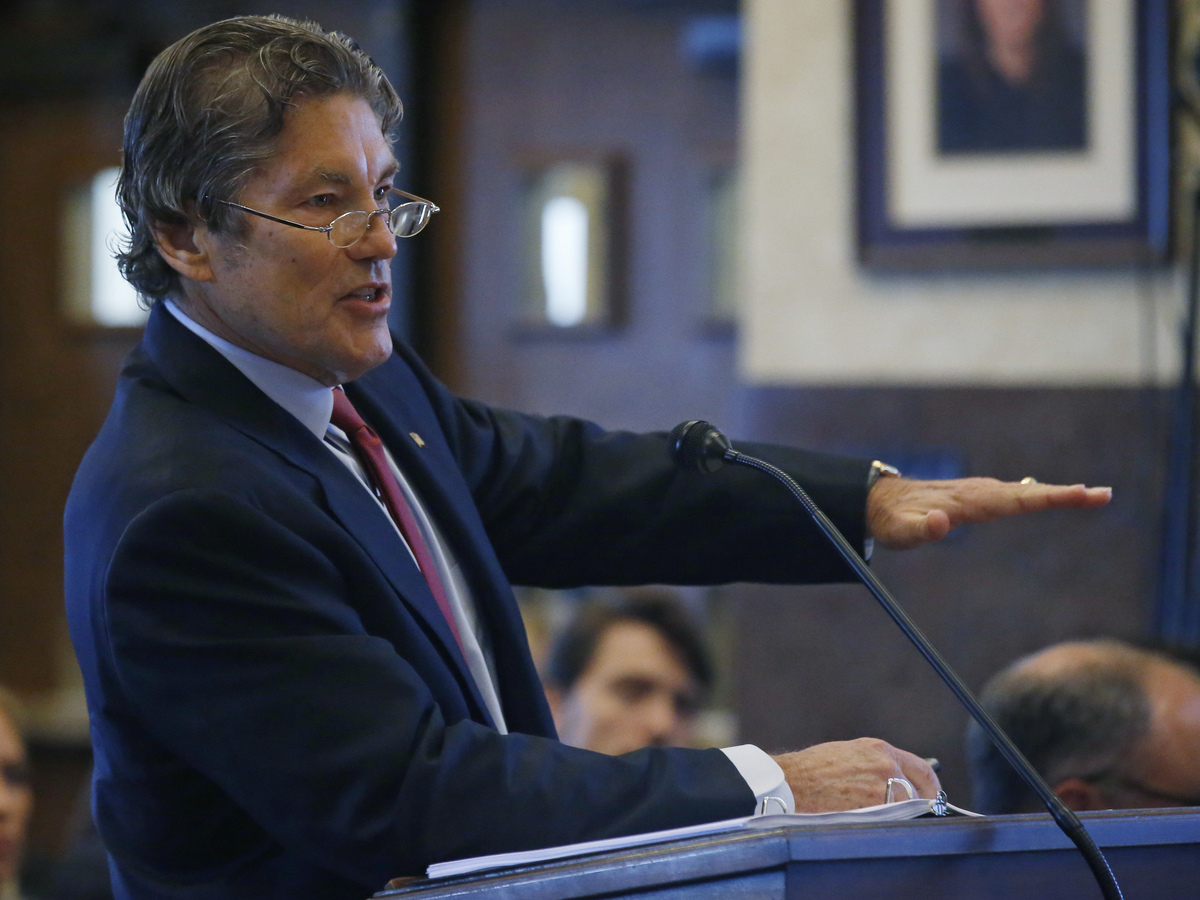 Defense attorney Larry Ottaway speaks on behalf of his client Johnson & Johnson during closing arguments. Oklahoma is asking a state judge for $17.5 billion to help pay for addiction treatment and prevention.

Ottaway played video testimony from earlier in the trial, showing Oklahoma doctors who said they were not misled about the drugs’ risks before prescribing them.

“Only a company that believes its innocence would come in and defend itself against a state, but we take the challenge on because we believe we are right,” Ottaway said in his closing argument.

Johnson & Johnson fought on after settlements

Initially, Hunter’s lawsuit included Purdue Pharma, the maker of OxyContin. In March, Purdue Pharma settled with the state for $270 million. Soon after, Hunter dropped all but one of the civil claims, including fraud, against the two remaining defendants.

Just two days before the trial began, another defendant, Teva Pharmaceuticals of Jerusalem, announced an $85 million settlement with the state. The money will be used for litigation costs and an undisclosed amount will be allocated “to abate the opioid crisis in Oklahoma,” according to a press release from Hunter’s office.

Both companies deny any wrongdoing.

The legal liability of ‘public nuisance’

Most states and more than 1,600 local and tribal governments are suing drugmakers who manufactured various kinds of opioid medications, and drug distributors. They are trying to recoup billions of dollars spent addressing the human costs of opioid addiction.

“Everyone is looking to see what’s going to happen with this case, whether it is going to be tobacco all over again, or whether it’s going to go the way the litigation against the gun-makers went,” says University of Georgia law professor Elizabeth Burch.

But the legal strategy is complicated. Unlike the tobacco industry, from which states won a landmark settlement, the makers of prescription opioids manufacture a product that serves a legitimate medical purpose, and is prescribed by highly trained physicians — a point that Johnson & Johnson’s lawyers made numerous times during the trial.

Oklahoma’s legal team based its entire case on a claim of public nuisance, which refers to actions that harm members of the public, including injury to public health. Burch says each state has its own public nuisance statute, and Oklahoma’s is very broad.

“Johnson & Johnson, in some ways, is right to raise the question: If we’re going to apply public nuisance to us, under these circumstances, what are the limits?” Burch says. “If the judge or an appellate court sides with the state, they are going to have to write a very specific ruling on why public nuisance applies to this case.”

Burch says the challenge for Oklahoma has been to tie one opioid manufacturer to all of the harms caused by the ongoing public health crisis, which includes people struggling with addiction to prescription drugs, but also those harmed by illegal street opioids, such as heroin.

University of Kentucky law professor Richard Ausness agrees that it’s difficult to pin all the problems on just one company.

“Companies do unethical or immoral things all the time, but that doesn’t make it illegal,” Ausness says. 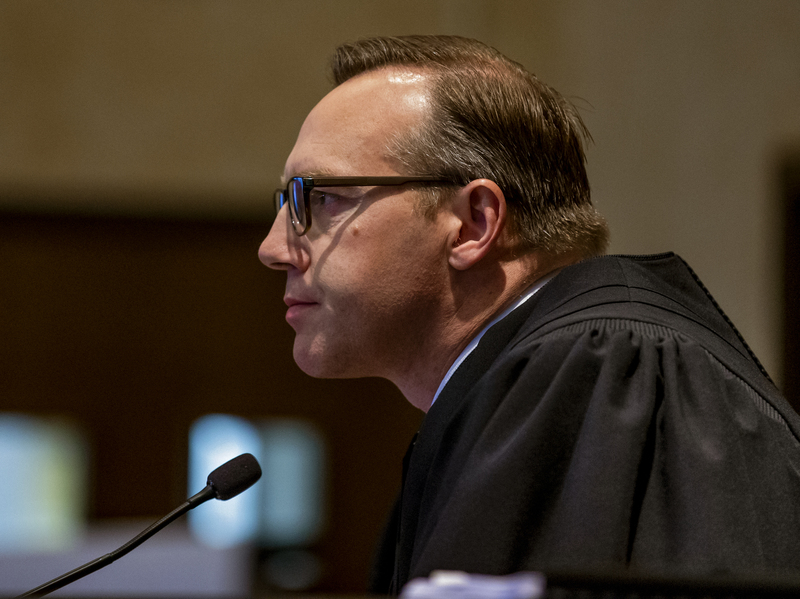 Judge Thad Balkman listens to closing statements at the Cleveland County Courthouse. The case was a bench trial, with both sides seeking to persuade a single judge instead of a jury. Judge Balkman is expected to issue a decision sometime in August. 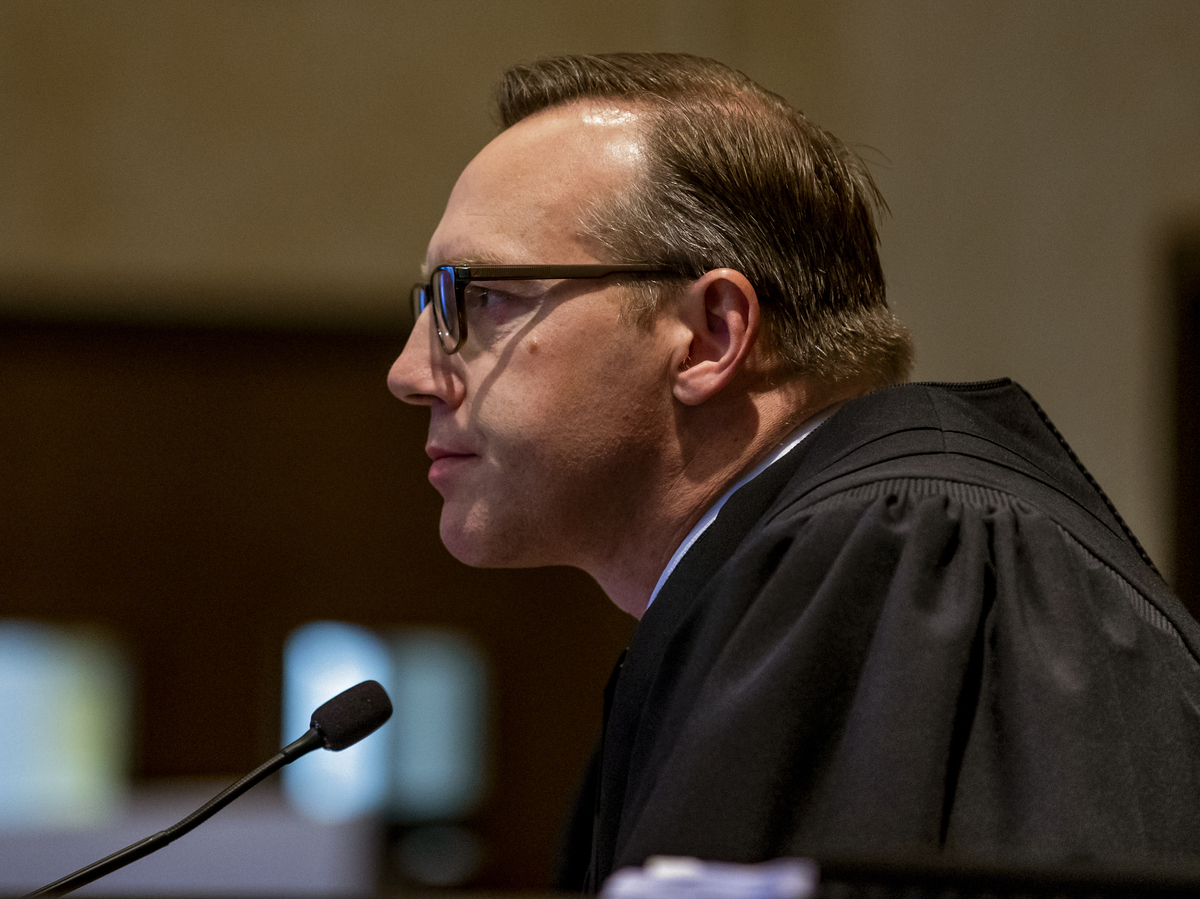 Judge Thad Balkman listens to closing statements at the Cleveland County Courthouse. The case was a bench trial, with both sides seeking to persuade a single judge instead of a jury. Judge Balkman is expected to issue a decision sometime in August.

If the judge rules against Johnson & Johnson, Ausness says, it could compel other drug companies facing litigation to settle out of court. Conversely, a victory for the drug giant could embolden the industry in the other cases.

Earlier in the trial, the state’s expert witness, Dr. Andrew Kolodny, testified that Johnson & Johnson did more than push its own pills — until 2016, it also profited by manufacturing raw ingredients for opioids and then selling them to other companies, including Purdue, which makes Oxycontin.

“Purdue Pharma and the Sacklers have been stealing the spotlight, but Johnson & Johnson in some ways, has been even worse,” Kolodny testified.

Kolodny says that’s why the company downplayed to doctors the risks of opioids as a general class of drugs, knowing that almost any opioid prescription would benefit its bottom line.

The state’s case also focused on the role of drug sales representatives. Drue Diesselhorst was one of Johnson & Johnson’s busiest drug reps in Oklahoma. Records discussed during the trial showed she continued to call on Oklahoma doctors who had been disciplined by the state for overprescribing opioids. She even continued to meet with doctors who had patients who died from overdoses.

But Diesselhorst testified she didn’t know about the deaths, and no one ever instructed her to stop targeting those high-prescribing physicians.

“My job was to be a sales rep. My job was not to figure out the red flags,” she said on the witness stand.

The role and responsibility of doctors

Throughout the trial, Johnson & Johnson’s defense team avoided many of the broader accusations made by the state, instead focusing on the question of whether the specific opioids manufactured by the company could have caused Oklahoma’s high rates of addiction and deaths from overdose.

Johnson & Johnson’s lawyer, Larry Ottaway, argued the company’s opioid products had a smaller market share in the state compared to other pharmaceutical companies, and he stressed that the company made every effort when the drugs were tested to prevent abuse. He also pointed out that the sale of both the raw ingredients and prescription opioids themselves are heavily regulated.

“This is not a free market,” he said. “The supply is regulated by the government.”

Ottaway maintained the company was addressing the desperate medical need of people suffering from debilitating, chronic pain — using medicines regulated by the Food and Drug Administration and the Drug Enforcement Administration. Even Oklahoma purchases these drugs, for use in state health care services.

Judge Thad Balkman is expected to announce a verdict in August.

If the state’s claim prevails, Johnson & Johnson could, ultimately, have to spend billions of dollars in Oklahoma helping to ease the epidemic. State attorneys are asking that the company pay $17.5 billion over 30 years, to help abate” the crisis in the state.

Balkman could choose to award the full amount, or just some portion of it, if he agrees with the state’s claim.

“You know, in some ways I think it’s the right strategy to go for the $17 billion,” Burch says. “[The state is saying] look, the statute doesn’t limit it for us, so we’re going to ask for everything we possibly can.”

In the case of a loss, Johnson & Johnson is widely expected to appeal the verdict. If Oklahoma loses, the state will appeal, Attorney General Mike Hunter said Monday.

This story is part of NPR’s reporting partnership with StateImpact Oklahoma and Kaiser Health News, a nonprofit news service of the Kaiser Family Foundation. KHN is not affiliated with Kaiser Permanente.