There may be a modest slowdown this year in the growth of drug prices, but it’s nowhere near the seismic shift President Trump has called for. And that seems to be irking the president to no end.

Much of the president’s frustration has been borne by Health and Human Services Secretary Alex Azar, a former drug executive who until very recently pushed back on proposals to allow the importation of lower-cost drugs from Canada and give the government the tools to directly negotiate lower drug prices in the Medicare program, my Washington Post colleagues Yasmeen Abutaleb, Josh Dawsey and Laurie McGinley report.

But now, under intense pressure, Azar has reversed his long-standing opposition to at least one of those ideas: drug importation, an idea typically embraced by Democrats and dismissed by Republicans and the drug industry.

“Inspired by the president’s passion, Secretary Azar has been pushing FDA to go even bigger and broader on importation,” a senior administration official told my colleagues, although the official declined to detail specific policy changes. Azar attends the 72nd World Health Assembly at the European headquarters of the United Nations in Geneva. (Salvatore Di Nolfi/Keystone/AP)

It’s been a little more than a year since Trump promised Americans, in a speech from the Rose Garden, he would slash the price of prescription drugs in the United States. In that time, his administration has proposed some bold new regulations that could help move the needle, but only one has so far been finalized — a new requirement that went into effect this month for drugmakers to list prices in television ads.

While Azar has championed a proposal to eliminate the secretive rebates drug manufacturers pay to insurers, opposition to the idea from Domestic Policy Council head Joe Grogan is hamstringing the effort, my colleagues report. Grogan dislikes its estimated $180 billion price tag and doesn’t view the measure as central to the administration’s drug-pricing effort, they write.

There’s another proposal under review at the Office of Management and Budget to tie some Medicare drug prices to those paid by other countries, but it’s opposed by key Senate Republicans and the drug industry.

A senior administration official downplayed talk of tension between Azar and Grogan, saying the two, along with White House legislative affairs director Eric Ueland, speak three times a week about what is happening on Capitol Hill.

And on Monday, the New York Post published a joint op-ed by Azar and Grogan praising a recent executive order from Trump aimed at more transparency around the prices negotiated between hospitals and insurers.

“President Trump has promised a better vision: a health care system that treats you like a person, not a number,” Azar and Grogan write. “He wants to hold providers and Big Pharma accountable to transparency and reasonable prices.”

We’re working every day to protect American patients and deliver on @POTUS’s vision for healthcare where you’re treated like a patient, not a number, with lower drug prices and increased transparency. Read Joe Grogan and I in ⁦⁦@nypost⁩: https://t.co/eYoIqzEm3X

Meanwhile, drugmakers have continued hiking prices, albeit a bit more slowly on average. List prices for branded drugs grew 3.3 percent in this year’s first quarter, compared with 6.3 percent in the first quarter of 2018, according to SSR Health pharmaceutical analysts. Bernstein analysts told Politico that drug prices jumped 10.5 percent over the past six months, less than over the same period last year but still four times the rate of inflation.

Trump has frequently referenced some encouraging data from the consumer price index, where the index for prescription drugs fell by 0.6 percent for the 12 months ending in December, according to the Bureau of Labor Statistics. The index also dropped in January, February, March and May — a string of monthly declines not seen since 1973, my Post fact-checking colleagues recently noted.

Yet these data are a far cry from the drastic price reductions Trump would love to tout on the campaign trail as he seeks reelection in 2020.

“By all accounts, drug prices are a fixation for Trump, who frequently sends advisers news clippings and summons them to the White House to rant about the issue,” Yasmeen, Josh and Laurie write. “The guy likes to make money, and he thinks they make too much money,” said one former senior administration official.

A senior administration official told my colleagues there was frustration at a lack of executive branch tools to lower drug prices and that some of Trump’s ideas were ambitious but unworkable.

“Disagreements over how to proceed have created a policy free-for-all as different advisers — and the president himself — pursue what appear to be ad hoc and sometimes dueling approaches,” they write. “Trump entertains proposals usually pushed by progressive Democrats one moment and free-market GOP ideas the next.”

Note to readers: The Health 202 is taking a break for the Fourth of July weekend and will be back in your inbox Monday, July 8. The Department of Health and Human Services building is seen in Washington. (AP Photo/Alex Brandon, File)

AHH: Medicare is considering covering acupuncture for patients that use the treatment for chronic low-back pain.

But even as the treatment gains legitimacy nationwide, the government insurance program may insert itself into a controversy over the practice’s effectiveness and whether it’s worthwhile medicine if it makes such a move, our Post colleague Lenny Bernstein reports.

“Some insurance companies cover the practice, respected medical institutions offer it, and schools of acupuncture produce new practitioners. The Department of Veterans Affairs has trained 2,400 providers to offer ‘battlefield acupuncture,’ five tiny needles inserted at points in each ear, for pain relief,” Lenny reports. Yet he notes that research “shows that acupuncture is little more effective than placebo in many cases. When the government’s Agency for Healthcare Research and Quality reviewed research on a wide range of therapies for chronic pain in 2018, it found the ‘strength of evidence’ that acupuncture works for chronic low-back pain is ‘low.’ ”

Meanwhile, HHS has pointed to the ongoing opioid crisis as part of the explanation for looking into “providing more evidence-based non-pharmacologic treatment options for chronic pain.” Low-back pain afflicts millions of people, ranking third in the causes of poor health or mortality nationwide. OOF: Sen. Elizabeth Warren (D-Mass.) is calling on former Food and Drug Administration commissioner Scott Gottlieb to resign from his recently announced post on the board of drug giant Pfizer.

“You are the second high-level Trump Administration official in less than two months to join the board of a corporation soon after leaving government service,” the Democratic presidential candidate wrote in a letter to Gottlieb. “[T]his kind of revolving door influence-peddling smacks of corruption, and makes the American people rightly cynical and distrustful about whether high-level Trump administration officials are working for them, or for their future corporate employers.”

While I was at FDA, I had a productive relationship with Senator Warren, working together to advance shared public health goals. I respect the Senator, and I will respond to her letter that I received today from reporters promptly, directly, and privately.

“Warren has been a critic of drugmakers, health insurers, banks and many other for-profit industries as she runs for the nomination,” Bloomberg News’s Anna Edney reports. “She has introduced legislation that would bar senior government officials from being hired by public companies for at least four years after leaving public service.” OUCH: Facebook announced it will begin to crack down on medical misinformation such as posts spreading false and sometimes dangerous claims about unscientific treatments related to cancer and other ailments. The company will start treating the claims like clickbait or spam to limit their reach, our Post colleague Abby Ohlheiser reports.

“Facebook will ‘down-rank’ posts that it believes contain health misinformation, meaning those posts will appear in the news feeds of fewer users, and less prominently,” Abby writes. “The down-ranking will also apply to some posts from Facebook groups devoted to natural treatments, which will show up less often in the news feeds of group members. The down-ranking process will use keywords and phrases that commonly appear in posts containing exaggerated or false health claims, but tend not to appear in posts containing accurate information on the same topics.”

Abby reported last month about popular and private groups on the social media platform that have thousand of members and in which people trade stories claiming to prove that alternative treatments can cure cancer or other illnesses. A pharmacist holds pills of misoprostol, one of two drugs taken in sequence to induce a medication abortion. (George Frey/Reuters)

— The American Medical Association has filed a lawsuit to stop a law in North Dakota that mandates that physicians tell women medication-induced abortions can be reversed, even though medical experts say that’s not the case.

The AMA, which joined the Center for Reproductive Rights to file the claim, is working with the last abortion clinic in the state to argue the abortion law “violates doctors’ constitutional right to free speech by forcing them to lie to patients,” our Post colleague Kayla Epstein reports.

Similar measures also exist in Idaho, Utah, South Dakota, Kentucky, Nebraska, Oklahoma, and Arkansas. “Supporters of these laws argue that a medical abortion can be reversed with doses of the hormone progesterone or by intervening after the first pill is taken,” Kayla reports. “Molly Duane, the lead lawyer for the Center for Reproductive Rights on the case, told The Post that forcing doctors to refer women to services that claimed to offer such a treatment amounted to a medical ‘experiment.’”

“Physicians across this country are greatly concerned” about such measures, AMA president Patrice A. Harris told Kayla. She said the AMA will “oppose any law or regulation that restricts our ability to talk to our patients honestly about their health, health care, or treatment alternatives.” A portrait of Wilmer Josué Ramírez Vásquez, a 2-year-old Guatemalan boy who died in U.S. custody on May 14, stands on an altar at his grandmother’s home in Tituque village, in the Olopa municipality of eastern Guatemala. (Moises Castillo/AP)

— A Guatemalan toddler who died in May after spending several days in the custody of Border Patrol passed away because of complications related to “multiple intestinal and respiratory infections diseases, according to a newly released medical examiner’s report, our Post colleagues Maria Sacchetti and Robert Moore report.

Three days after U.S. Customs and Border Protection apprehended Wilmer and his mother in April, CBP took Wilmer to a local emergency room after his mother said he was sick. The medical examiner’s report said the child arrived in “respiratory distress.”

“Lawyers supporting Wilmer’s family said the boy and his mother were ‘subjected to inhumane conditions’ during their three days in Border Patrol custody, ‘including exposure to extreme temperatures, being forced to sleep outside on the ground, and other terrible conditions of confinement,’” Maria and Robert report. An El Paso pediatrician who has treated hundreds of migrant children told The Post the parasites found in the autopsy report are common in Central America, not in the United States, and noted they are treatable if found quickly. He questioned whether the health-care workers overseeing migrant children are checking for such parasites.

— And here are a few more good reads from The Post and beyond:

HEALTH ON THE HILL 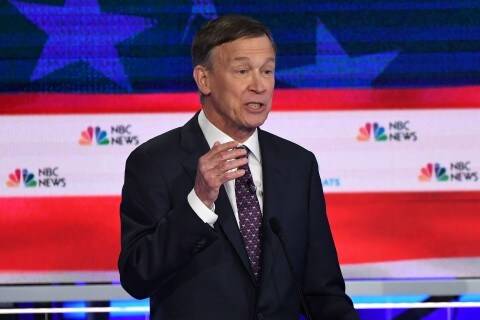 “But the bottom line is for a small campaign like us … it’s harder to raise money because we’re not promising free health care or, you know, to forgive free tuition for everyone, forgive student debt.”

Technology To Clean And Reuse PPE Is Being Deployed To Hotspot Hospitals : NPR