How much is your data worth to Facebook or Google? A bipartisan pair of senators want the companies to tell you — and regulators.

Sens. Mark Warner (D-Va.) and Josh Hawley (R-Mo.) will propose legislation today forcing the social media companies to tell users how they are monetizing their data. Their bipartisan bill would also require the companies to regularly disclose the ways consumers’ data is being used, as well as file an annual report on the total value of all the data they’ve collected.

The senators think their proposal will help consumers make more informed choices when they sign up for “free” services online that make money through ad targeting and other data collection services rather than payments from consumers.

“For years, social media companies have told consumers that their products are free to the user. But that’s not true — you are paying with your data instead of your wallet,” Warner said in a statement Sunday night. “But the overall lack of transparency and disclosure in this market have made it impossible for users to know what they’re giving up, who else their data is being shared with, or what it’s worth to the platform.”

The senators also say their proposal could help Washington regulators who are increasingly eying the impact Big Tech has on competition. They say the lack of transparency around the companies’ data collection practices and the data’s value has been an impediment to the Federal Trade Commission as it seeks to crack down on Silicon Valley — and their legislation would help pull back the curtain.

The pair said putting a price on data could make it easier for antitrust enforcers to identify unfair transactions or anticompetitive practices, especially in categories like social media where services are free and regulators can’t rely on prices of the service as a means to measure whether the companies’ practices are harming consumers. The senators are unveiling their legislation as antitrust activity is snowballing in Washington, with House lawmakers opening a wide-ranging probe into the tech industry’s power and federal agencies considering probes into tech giants including Google.

“It’s also about trying to grapple with the enormous power these companies have,” Warner said in an interview on Axios on HBO, where their effort was first reported. “I don’t think there was a time in history when companies grew so quickly, had as much pervasive power, and really have as much ability to kind of influence everything about how we do, and how we vote, and how we think than these companies do.”

The legislation is likely to face pushback from the tech industry — especially because it could be difficult to come up with a consistent way to calculate data’s value when companies might use the same data for many different parts of their business. The bill — officially called the Designing Accounting Safeguards to Help Broaden Oversight and Regulations on Data or DASHBOARD Act — calls on the Securities and Exchange Commission to develop methodologies for calculating data’s value, and it encourages the agency to be flexible based on sectors or differing business models. It only applies to companies with more than 100 million monthly active users.

Warner said in the Axios HBO interview that companies clearly have a “pretty darn good notion” of how much data is worth based on their ability to strategically make acquisitions. He pointed to Facebook’s acquisition of Instagram.

Warner and Hawley are two of the senators most active on tech issues in Washington, and the duo previously teamed up on Hawley’s “Do Not Track” legislation, which would allow people to opt out of data tracking online, much like they opt out of calls from marketers with the “Do Not Call” list.

Amid a broader debate about privacy in Washington, there are questions about how much impact the DASHBOARD Act would have. As Lindsey Barrett, a staff attorney at Georgetown Law’s Institute for Public Representation Communications & Technology Clinic notes, greater transparency might not change tech companies’ practices:

this isn’t unhelpful, but visibility into the value of data doesn’t limit how companies are able to digitally exploit people, and nor do deletion rights. https://t.co/RmjvletRv3 pic.twitter.com/HSGwdfgiJa

David Carroll, an associate professor of media design at The New School, noted it could help consumers seek damages against companies:

Good to add that this DASHBOARD Act puts a monetary value on personal data so that when it is abused consumers have an injury to seek damages against. It’s a start. https://t.co/Nzi3JWqSGO Packages move along a conveyor at the Amazon fulfillment center in Robbinsville, N.J. (Bess Adler/Bloomberg News)

BITS: Counterfeit books have exploded on Amazon, as the company takes a “hands-off” approach to policing the quality and authenticity of the books sold on its platform, David Streitfeld reports in the New York Times. Publishers say Amazon’s dominant position in the book market — where it sells more than half of books in the United States and acts as a platform for third-party sellers — is to blame. The company often only takes action against counterfeits after someone complains.

“Being a tech monopoly means you don’t have to care about quality,” said Bill Pollock, a San Francisco publisher who has dealt with fake versions of his firm’s computer books on Amazon, told the New York Times.

The company’s activity in the book market offers a window into what happens when a tech behemoth dominates an industry — which could offer lessons for lawmakers and regulators who are increasingly eager to scrutinize Silicon Valley’s power.

An Amazon spokeswoman pushed back on the Times characterization of the counterfeitting problem, telling Streitfeld, “This report cites a handful of complaints, but even a handful is too many and we will keep working until it’s zero.” The company said it adopted a strict ban on counterfeit products and last year blocked accounts to more than one million suspected bad actors. Amazon CEO and owner Jeff Bezos also owns The Washington Post. NIBBLES: U.S. trade officials have banned shipments to four Chinese technology companies and one research institute specializing in supercomputing, my colleagues Craig Timberg and Ellen Nakashima report. The move could harm U.S. chip manufacturers that deal with China, including Intel and Nvidia, and possibly force Chinese companies to excise U.S. chipmakers from their supply chains.

The ban, which cites national security concerns, is another blow as the United States increasingly takes actions aimed at China’s rapidly evolving tech sector. “The timing here is important because China is really just on the cusp of moving away from U.S. dependence to a certain degree of independence in high-performance computers,” Bob Sorensen, vice president of research and technology at Minneapolis-based Hyperion Research, told Ellen and Craig.

While China and the U.S. have been longtime rivals over supercomputing given the technology’s potential to enhance warfare, China has traditionally lagged behind in chip production. The new ban could slow down supercomputing research by the targeted entities, at least temporarily. Vehicles line up to enter the United States from Mexico at a border crossing in El Paso. (Gerald Herbert/AP)

CBP officials have understated the scope of the material taken in the hack — saying that fewer than 100,000 photos of travelers were affected by a May breach. The agency said that none of those photos were available on the “dark Web.”

Instead, Drew found a trove of sensitive information, including schematics and “extensive detail” on technology installed at various points of entry as well as at U.S. military bases. Hacked documents showed plans for expanding government “use of license plate readers and facial-recognition cameras, including such details as how many cameras are focused on which traffic lanes at some of the busiest border crossings in the world.”

The hacked documents included plans from Perceptics, the contractor that probably was breached, for a new facial recognition software that could identify obstructed faces at the border.

Lawmakers and advocates are using the breach to warn about the dangers of unregulated government surveillance using emerging technologies.

“This kind of breach highlights the dangers of mass collection of sensitive data,” Rachel Levinson-Waldman, senior counsel at the think tank Brennan Center for Justice, told Drew. “Large-scale collection of personal information is not costless. Congress must exercise vigorous oversight and demand that agencies limit the sensitive information they collect and safeguard the data in their possession.”

— Trump’s trade war is unleashing economic uncertainty on Amazon’s army of small merchandisers who make a living selling cheap Chinese goods on the platform, Bloomberg News’s Shelly Banjo and Spencer Soper report. Sellers looking ahead to the holiday season have to decide whether they need to relocate production, reduce stock or hike prices. Any of these options could come with their own trade-offs — and have an upstream impact on Amazon’s bottom line.

Amazon is paying increased fees to some wholesale vendors affected by the tariffs. Amazon told Bloomberg it was “working closely with vendors to make this adjustment as smooth as possible.”

— More news from the private sector: 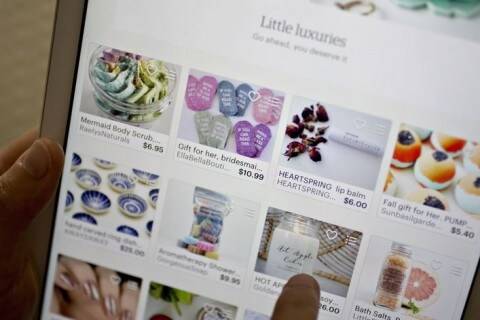 Information-technology executives are pushing to make their systems more energy-efficient, developing and tweaking software to cut waste and tracking how much energy their operations consume.

— Elon Musk, the chief executive of Tesla, unveiled his latest project. But people on Twitter were quick to note that this is in fact an image of the moon: