Jun 19, 2019 — Full-time physician, pharmacy and lab manager, head of a medical staff – those are some of the hats Kathleen Camelo wears on a daily basis as Director of SUNY Plattsburgh’s Student Health and Counseling Center.

Kathleen grew up in Keeseville, moved to the West Coast to start her medical career, and then came back to the area and SUNY Plattsburgh in 1994.

As a kid growing up in Keeseville, Kathleen Camelo was pretty clear on what she wanted to do when she grew up – be a doctor. “That’s kind of really the only thing I wanted to do.” She says there were a few contributing factors. In middle school she loved science, especially learning about bones.

“It just came to me that maybe I could do this for a living, and what could I do with this knowledge?”

She also had a role model in her community to look up to, the local general practitioner, Dr. Soble.

“He used to make house calls. He would suture, take our warts off, treat my grandmother for congestive heart failure. So he was the quintessential general practitioner, and I wanted to be like him.”

Kathleen also danced ballet growing up, which she says was formative because it’s a “disciplined art.” It gave her the tenacity to get through medical school, and also helped her stand strong with her decision to pursue a medical career. She remembers a high school guidance counselor warning her how hard it might be, and thinking:

Hitting the books and gaining experience 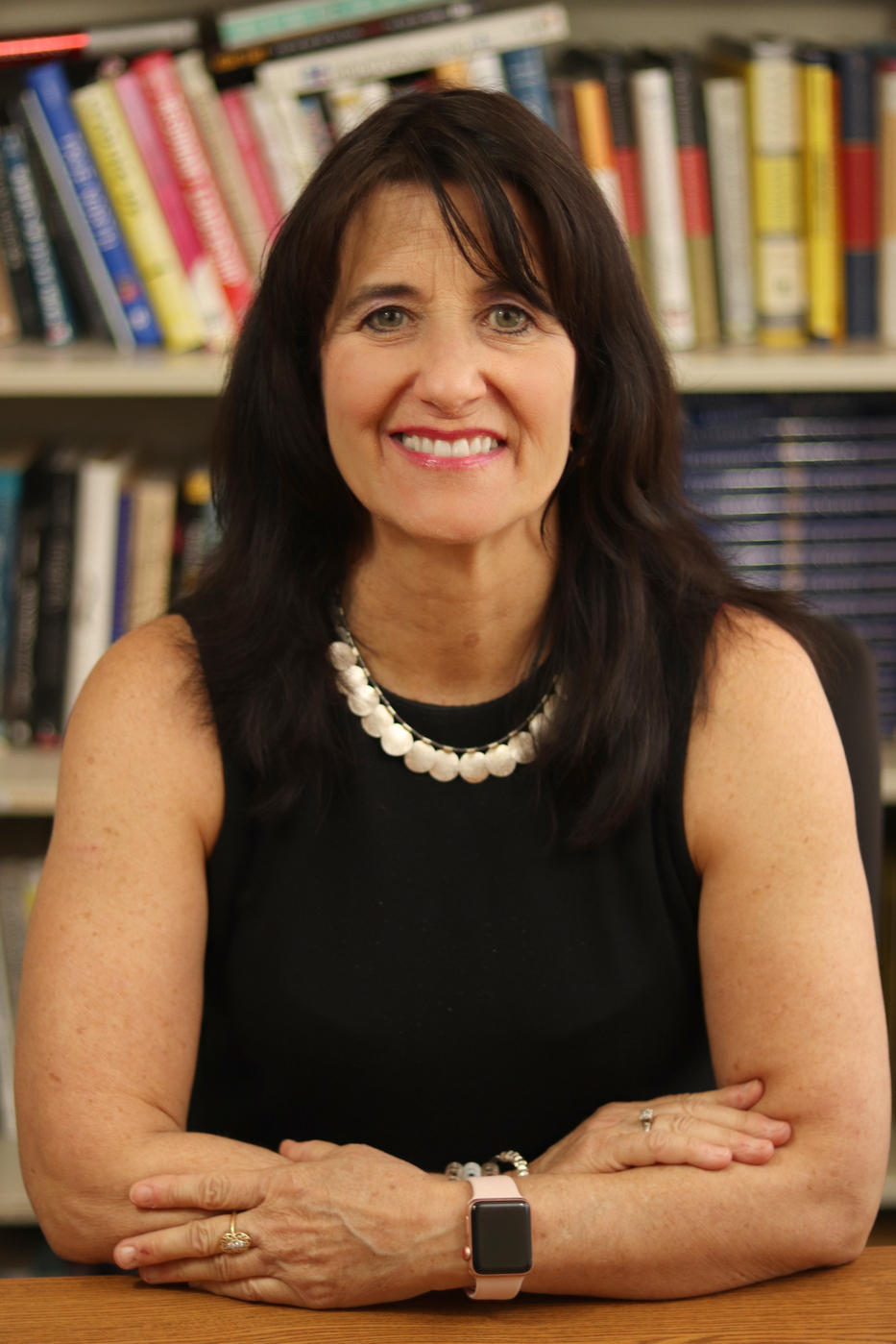 Kathleen completed her undergraduate studies in Syracuse, and went through medical school in Buffalo. She did a number of month-long rotations, once of which she chose to do in Tupper Lake, where she had realtions and family ties; it’s where her father grew up. She knew the community and figured…

“If I could see what it was really like to be in a really rural area, then this is what I should do. I worked with another very young doctor, and it was just a ball. I learned so much. I really enjoyed the people, and that really just cinched it.”

Kathleen did her residency work in Maine and on the West Coast, then became a partner in a team of 100 family practitioners in San Diego. She enjoyed her work, but it was a lot of hours, and San Diego was far from her family and roots.

In 1994, she came home to start working at SUNY Plattsburgh. 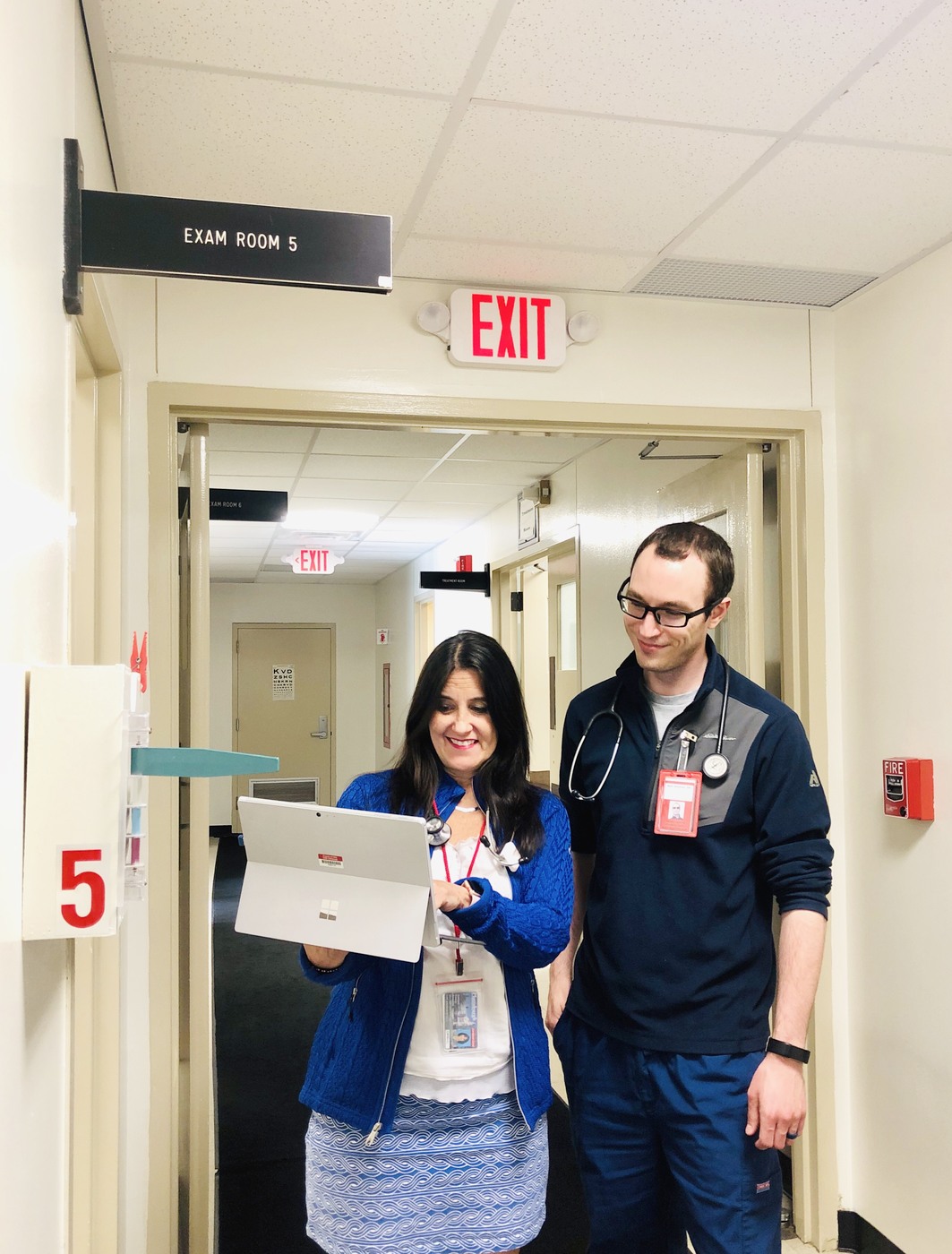 Kathleen says that one of her main focuses is holistic medicine. When she started in 1994, the college’s counseling and health services were separate departments that referred patients to each other – as soon as she could, she brought them together.

She thinks of the center as one big team, and that’s how she manages it; there are lots of meetings and group huddles in the mornings, to check in and make team game plans. Kathleen sees patients every day (she is the center’s full-time physician), but she also leads a medical staff of six (including PAs and Nurse Practioners) and manages the day-to-day running of the entire health and counseling center. It’s a mix of one-on-one care and being the circus ringmaster. 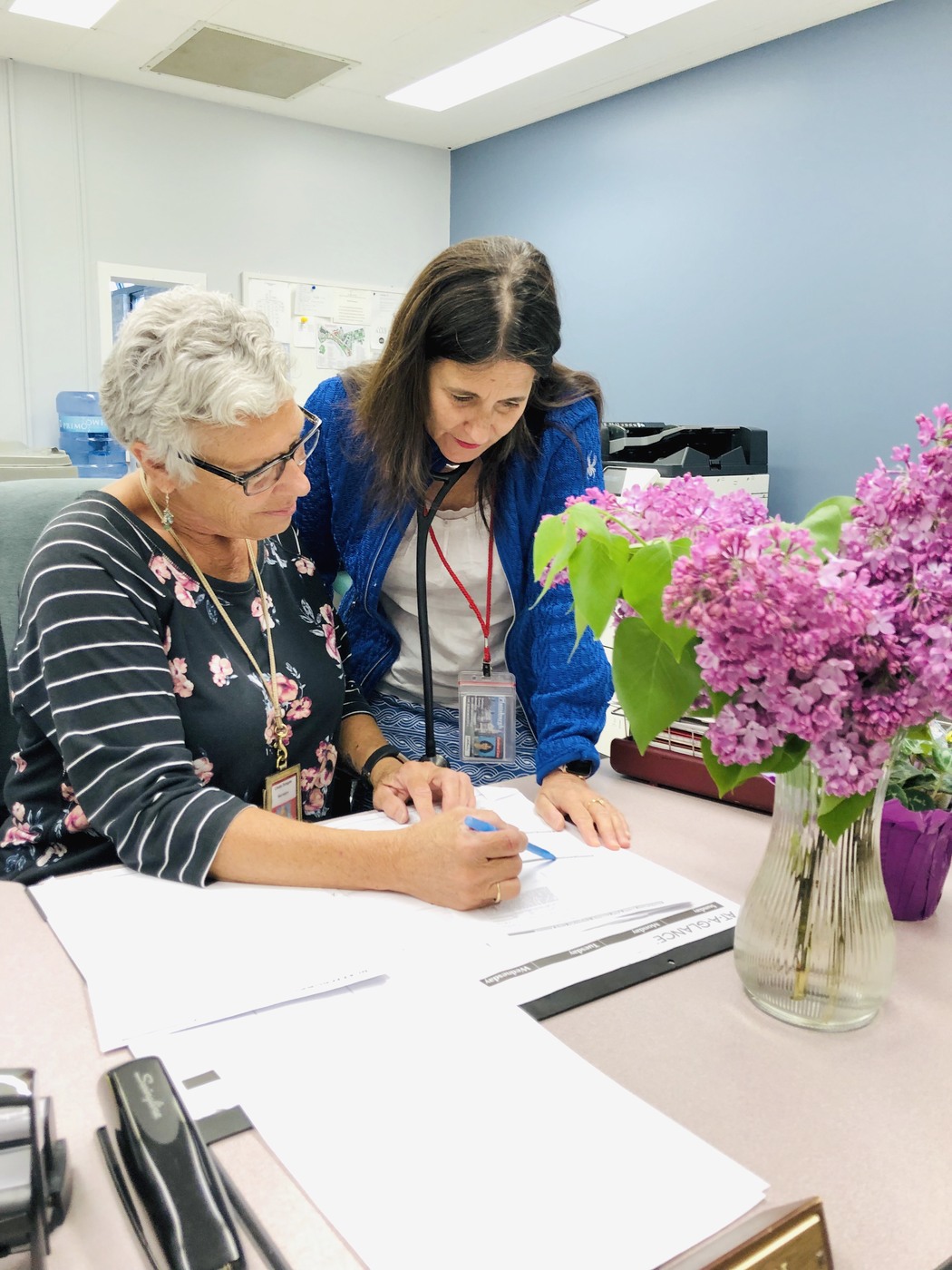 The center is kind of like a mini-hospital on campus; the pharmacy is a fully-stocked dispensary, and the laboratory is “greater than what you’d see in a regular doctor’s office” For example, they make cultures, which means Kathleen has to put on her “pathology hat.” Her management team consists of the assistant director of counseling, the assistant director of medical services, director of nursing, and a finance and operations manager. Kathleen says of the center’s work:

“We do everything. We see acute illness, chronic illness, we treat for depression, anxiety, obsessive compulsive disorder…”

And her favorite hat to wear is that of plain-old general practitioner.

“It’s the patient interaction. I enjoy meeting people, it’s very satisfying when you can make a difference in their life and in their health.”

Lots of patients Kathleen may see once or twice while they’re at SUNY Plattsburgh, but some she takes a much longer journey with.

“The population that I tend to see over and over again are the patients I’m treating for mental illness. So those patients, you know, you have to get them on medication, you have to see them frequently at the beginning, and once they’re stable they need to come back.” 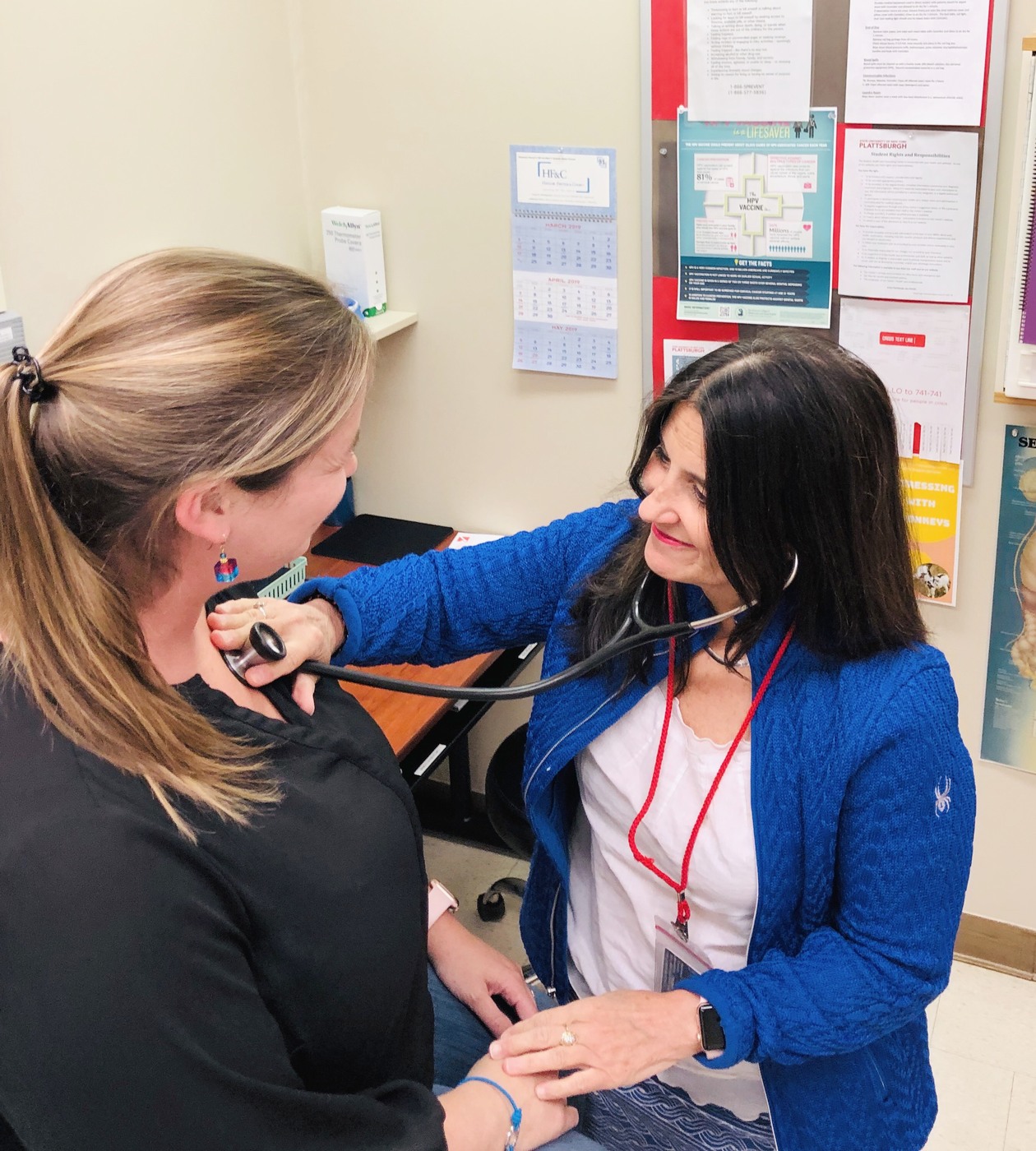 Doctor Camelo with a patient. 2019. Photo courtesy of Kathleen Camelo.

She also recently started administering transgender hormone therapy. “That’s very rewarding. There’s not a lot of services in this area.”

Kathleen started when she realized she had a student who was getting services in Burlington from a family practitioner. The doctor got in touch with Kathleen, told her about the patient, and offered to walk Kathleen through the process.

“She mentored me with that one patient.”

Kathleen dove in, started attending conferences, and decided “You know what? I can do this.”

Engaging in this kind of hormone therapy requires frequent visits that start after an extensive medical and mental health evaluation, and one of the longest informed consent processes in medicine, which means Kathleen sees a lot of these patients. She’s often there to talk them through the entire process.

“…you know, just sort of talking them through how these changes are affecting them. It’s very rewarding, for both me, because I’m helping someone, and because this is something that they’ve generally thought about for quite a long time.”

Since she returned to the Plattsburgh area in 1994, Kathleen has recieved a number of job offers back on the West Coast, but says when it came down to it, she could never leave the North Country.

Find scores of work stories and thousands of work photos at http://ncpr.org/work