Many investors believe the Federal Reserve is set to start cutting interest rates, possibly as early as this week. And history shows one group of stocks stands out as an outperformer after the Fed begins cutting.

Health care stocks outperform the market by about 7% in the nine months following a rate cut, data compiled by Barclays shows. And what makes the group special relative to other groups is its consistency of performance following eases.

The firm ran deep analysis on Fed rate cut cycles and found that overall market performance and performance of most sectors varies depending on why the central bank is cutting rates. Barclays determined there were two types of rate-cutting environments: an economic “soft patch” and a recession. Health care was the only sector that thrived in both those rate-cutting scenarios.

A doctor examines a patient.

The Fed begins a two-day meeting on Tuesday. Most economists don’t expect a cut on Wednesday, but believe the Fed will signal that monetary easing is likely on the way later this year. The 10-year Treasury yield fell to a new 20-month low on Tuesday in anticipation of rate cuts. Meanwhile, health care shares have started to turn around after some struggles earlier in the year. Shares of UnitedHealth, Pfizer and Merck are all higher in the last month.

The durables sector does not fare well after the Fed lowers rates. The sector stands out because of its consistent underpeformance. The sector has historically underperformed the market between 3% and about 8% after the central bank begins to lower rates, Barclays found. Durables include goods like autos, machinery and homes, which are highly sensitive to the economic cycle 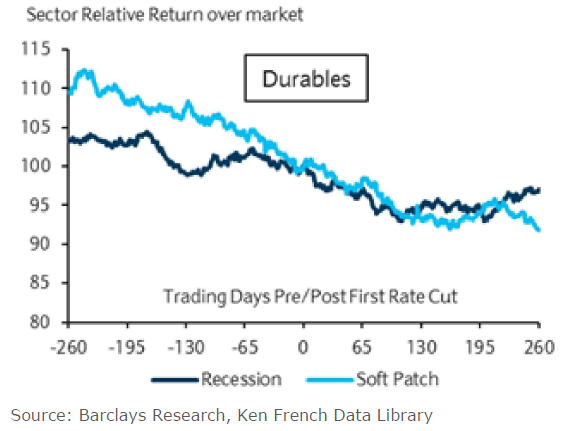 Weaker data, along with lingering trade worries, have dampened the U.S. economic outlook and increased bets that the Fed will loosen its monetary policy stance. Market expectations for a rate cut in July stood above 86%, according to the CME Group’s FedWatch tool. Investors are also pricing in a rate cut in September and another on in December.

If the Fed does cut, it won’t be clear for a while whether it’s doing so in an economic environment of a recession or a “soft patch.”

But Deshpande said the current sector performance in stocks points to the former.

“Using the historical behavior of sectors and factors around prior rate cut cycles, we can attempt to determine whether the recent sector performances are indicating an anticipated soft patch or a recession,” Deshpande noted. “In late 2018, Utilities (recession outperformer) and Non-Durables (recession outperformed) rallied while Tech (soft patch outperformer) fell, indicating a perception that an economic slowdown would morph into a full recession. Since that time, Tech rallied back while Non-Durables and Utilities stalled.”