5G Technologies and the Driverless Car

Anne Schauer-Gimenez (left) Allison Pieja (center) and Molly Morse of Mango Materials stand next to the biopolymer fermenter at a sewage treatment plant by the San Francisco Bay. The fermenter feeds bacteria the methane they need to produce a biological form of plastic. 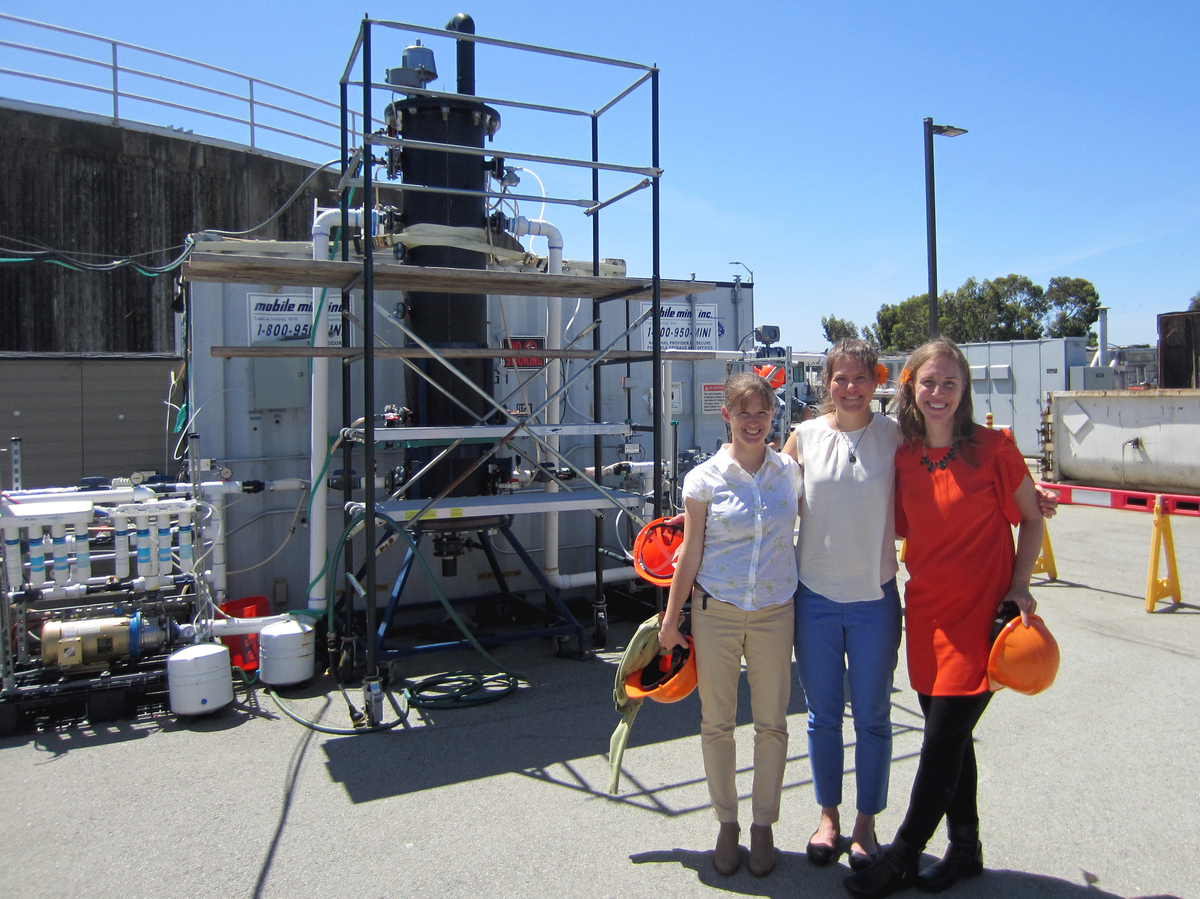 Anne Schauer-Gimenez (left) Allison Pieja (center) and Molly Morse of Mango Materials stand next to the biopolymer fermenter at a sewage treatment plant by the San Francisco Bay. The fermenter feeds bacteria the methane they need to produce a biological form of plastic.

If civilizations are remembered for what they leave behind, our time might be labeled the Plastic Age. Plastic can endure for centuries. It’s everywhere, even in our clothes, from polyester leisure suits to fleece jackets.

A Silicon Valley startup is trying to get the plastic out of clothing and put something else in: biopolymers.

A polymer is a long-chain molecule made of lots of identical units. Polymers are durable and often elastic. Plastic is a polymer made from petroleum products. But biopolymers occur often in nature — cellulose in wood or silk from silkworms — and unlike plastic, they can be broken down into natural materials.

Molly Morse manufactures biopolymers that she hopes will replace some kinds of plastic. She runs a small company called Mango Materials. Mango is her favorite fruit, and she wanted her company to sound different from other tech enterprises in the San Francisco Bay Area. “We’re not your typical Silicon Valley startup company,” Morse says. “We’re manufacturing polymers at a waste-water treatment plant. We’re not a bunch of guys in a garage coding.”

So how did she end up making bioplastic at a sewage treatment plant?

Morse says it started when she was in elementary school. She went to an aquarium and stumbled on an exhibit about plastic trash floating in the ocean. “There was this huge, gigantic-like fish-tank-type structure full of clamshells, like styrofoam clamshells from McDonald’s,” she recalls. “And I was floored … completely horrified. It changed my life and I was like, that is freaking ridiculous, and I’m going to change it.”

She followed through. She went to Stanford University and got a doctorate in environmental engineering. At a scientific conference in 2006, she met another young engineer, Anne Schauer-Gimenez. “I think we were up to like 4 in the morning or something,” Schauer-Gimenez says, “just talking about research and how this process works.”

The process was how to manufacture biopolymers — using bacteria.

There are certain kinds of bacteria that eat methane. The bacteria use it to make their own biopolymers in their cells, especially if you feed them well. “If we were to get really fat from eating a lot of ice cream or chocolate,” Morse explains, “we’d accumulate fat inside our bodies. These bacteria, same thing.”

Schauer-Gimenez adds: “To me, microorganisms kind of run the show on planet Earth anyway, so why not let them help us with this process?”

To make biopolymers, the bacteria need lots of food. That’s why Mango Materials set up a field site at a sewage treatment plant called Silicon Valley Clean Water in Redwood City, Calif., next to the San Francisco Bay. They got funding from the National Science Foundation, among other backers.

Sewage, or at least the methane gas that sewage emits, is food for bacteria. Treatment plants usually burn off the methane or just vent it into the air. Methane is a potent greenhouse gas that contributes to global warming when it goes into the atmosphere. Mango feeds it to the bacteria.

That’s done in a fermenter set up outside, nestled between big steel tanks full of sewage. Engineer Allison Pieja, a third member of the Mango leadership team, shows off their invention. It looks kind of like a big beer keg with pipes sticking in it like intravenous drips. “This is where the magic happens,” she says.

Pieja is the bug expert at Mango. “We add the methane and oxygen continuously and kind of drip in our secret sauce based on how the bacteria are growing,” she says. The secret sauce is an additive the team developed to keep the process going.

Eventually, when the bacteria are fattened up, the team breaks them open and harvests the biopolymer. They dry it and turn it into pellets.

So far, they’ve shipped almost 2,000 pounds of their biopolymer to companies interested in using it. Their principal target market is textiles (though they say the biopolymer works for packaging, too). They’ve produced brightly colored threads that look and feel “plasticky,” like polyester maybe. The hope is to weave the biopolymer into clothing to replace plastics in textiles. A sleeve made from biopolymer for clothing. The Mango team is working with several companies to test how well their biopolymer will work in textiles. 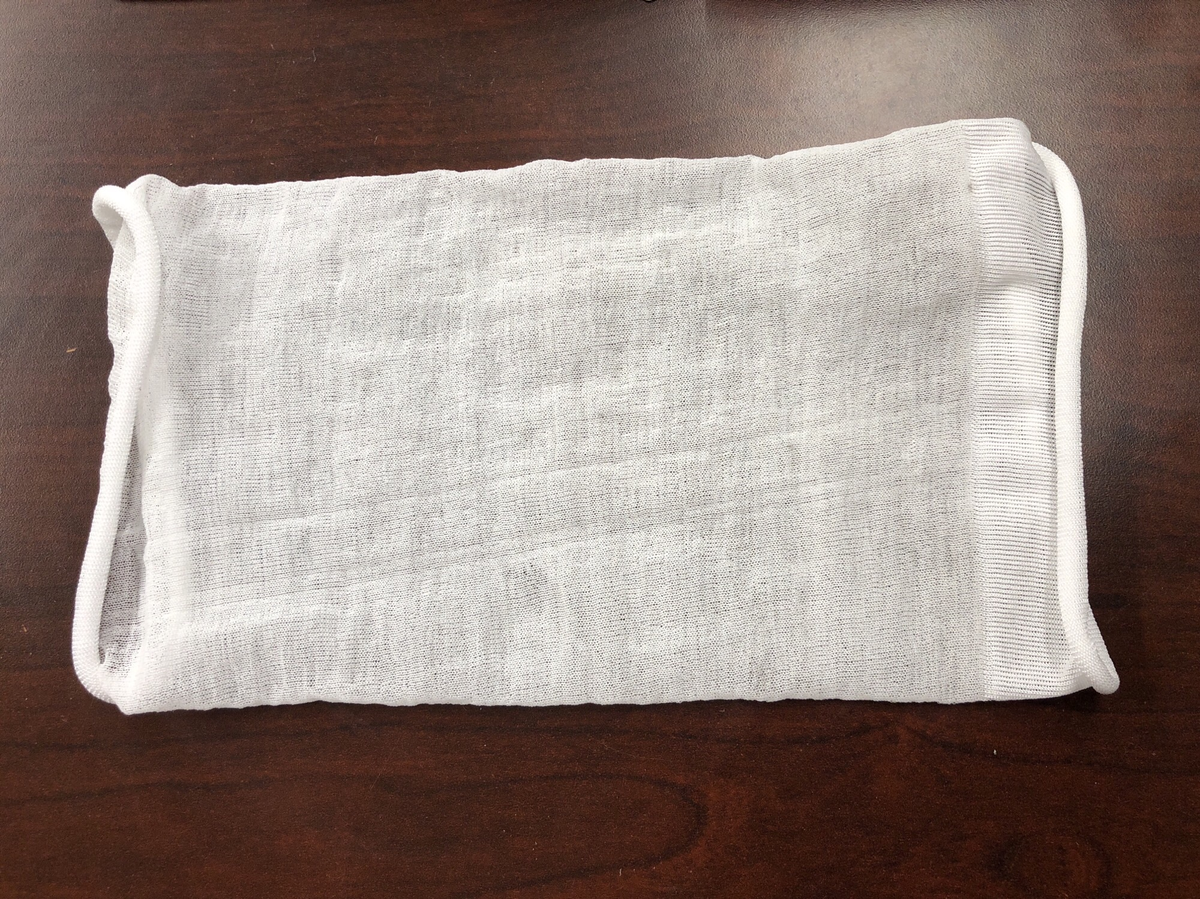 A sleeve made from biopolymer for clothing. The Mango team is working with several companies to test how well their biopolymer will work in textiles.

It would be biodegradable clothing, which Schauer-Gimenez says freaks people out. ” ‘Oh my gosh, you’re going to make a swimsuit out of your material? I’m going into the ocean and it’s going to biodegrade off my body!’ And I’m like, ‘No, no, no, no, no, it doesn’t quite work like that.’ “

To degrade, biopolymers need warm temperatures and the right bacteria around to chew them up, and the process takes weeks or months of constant exposure. Morse acknowledges that if conditions aren’t right, though — say in a dry Arizona desert or at the bottom of the ocean — it will take longer.

That’s one of the drawbacks of biopolymers so far; some haven’t lived up to their promise to biodegrade quickly.

Biology professor John Weinstein at The Citadel in South Carolina put corn-based polymer bags in a wetland and found they degraded even more slowly than regular plastic bags. “You’ve created a new material,” he says of the bioplastic, “but how does it break down? I was surprised.”

The federal government and the state of California have penalized companies for selling biodegradable “plastic” that actually takes years to break down.

“Making a statement — ‘biodegradable’ — that is misleading, especially to the general public,” says Ramani Narayan, a chemical engineer at Michigan State University and an expert on bioplastics.

He says it’s all about the environmental conditions. And the longer something takes to biodegrade, the longer it’s litter. “In that intervening period, it is going to have impacts, and that is what needs to be carefully considered,” Narayan says.

Moreover, a big market in biopolymers made from feedstocks such as corn could raise food prices.

Plant-based biopolymers can be composted at an industrial facility that uses high heat and pressure. But Narayan points out that the industry in the U.S. is in its infancy. As for recycling them, he says the recycling industry is already overwhelmed. The Environmental Protection Agency’s latest figures, for 2015, show only 9.1% of U.S. plastic waste was recycled. That number is thought to be even lower now that China and other countries have stopped recycling the waste — as little as 2.2% is recycled in the U.S., according to research by engineer Jan Dell, founder of the anti-pollution group The Last Beach Cleanup.

“If we don’t have the right waste management infrastructure in play” to recycle new plastic replacements, Narayan says, “then all the things we do at the top end of it is going to be useless.”

The team at Mango Materials says their material (a form of polyhydroxyalkanoate, or PHA) is different from most biopolymers and doesn’t need to be recycled, but will biodegrade in a month or two in the right conditions. Their products are currently being tested independently to confirm that.

Morse acknowledges there’s a lot more to do to pave the way for biopolymers, and she urges people to use less plastic and reuse things instead of throwing them away. But she’s following that childhood dream — to find something better than plastic.

“We wouldn’t be [doing this] unless we firmly believed that this is a solution to a massive global problem,” Morse says.

A problem that won’t go away on its own.

Crack up colleagues with these Zoom meeting sound effects | Technology