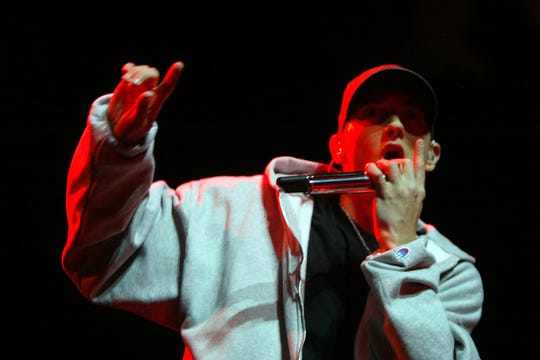 Eminem performs onstage with Kuniva of D12 for the release party of his new album Relapse at the Sound Board stage in the Motor City Casino in Detroit, on Tuesday, May 19, 2009.  (Photo: Kimberly P. Mitchell, Detroit Free Press)

The status of original, priceless master recordings by a host of top-name artists remained up in the air Tuesday following an explosive report revealing the true devastation of a 2008 Hollywood fire.

They include recordings by Detroit rapper Eminem. His tape reels were named among a slew of musical works in the New York Times’ investigation into the fire on the Universal Studios lot, which destroyed a vault that may have contained 175,000 multitrack recordings, session masters and outtakes by “a genre-spanning who’s who of 20th- and 21st-century popular music,” as reporter Jody Rosen writes.

Although the fire was widely reported in 2008, the Times story contends that Universal Music, the world’s biggest record company, hid the staggering scope of the loss from the public and even affected artists. The facility apparently housed master tapes of music by Chuck Berry, Louis Armstrong, Nirvana, Tom Petty, Elton John, Ray Charles, George Jones and many others, according to the Times story.

Universal has storage facilities across the country, and it’s difficult to get a comprehensive accounting of which tapes were housed where at the time of the fire. That seems to be the case for Eminem: His representatives were unable to say Tuesday which of the rapper’s master tapes may have been stored in the vault that was destroyed.

However, “I’m fairly confident that most, if not all, of the masters are backed up,” Eminem spokesman Dennis Dennehy told the Detroit Free Press.

Indeed, those tapes seem to have been painstakingly duplicated onto digital media just in the nick of time — months before the June 2008 disaster.

Joel Martin, operator of 54 Sound studio in Ferndale and manager of Eminem’s former production team, the Bass Brothers, said his team digitized all of the tape reels at hand in early 2008. That included Eminem music recorded at 54 Sound — such as “The Marshall Mathers LP,” “The Eminem Show” and hits such as “Lose Yourself” — along with tapes created in Los Angeles with producers such as Dr. Dre.

Martin said he was spurred to undertake the “thorough process” of backing up the tapes when Universal, Eminem’s label, requested that all of the rapper’s recording reels be sent to L.A.

“They was some type of effort underway to get all of the master tapes into one place,” Martin said. However, he noted, “I’m not sure where (Universal) kept them.”

Rare video captures Eminem and the Bass Brothers 20 years ago during the “The Slim Shady LP” release (Photo: Mandi Wright)

The backups, while vital, still don’t equate to the original session reels — the first-generation magnetic tape bearing the cleanest, most precise document of the music. And digital media has its own long-term issues with degradation and compatibility.

Still, Martin’s backup effort included Eminem’s raw 24-track tapes, containing all of the assorted vocals, instruments, beats and other sounds captured in isolation. That’s crucial for future remixing projects and other uses of the music that made Eminem the best-selling recording artist in the first decade of the 2000s.

Eminem isn’t the only iconic Detroit music figure whose original recordings may have been destroyed in the Universal fire: The Times reports the casualties apparently included the master tape of Highland Park native Bill Haley’s “Rock Around the Clock,” the towering 1955 single that topped the Billboard chart to launch the rock ‘n’ roll era.

An earlier calamity had already destroyed the masters and multitracks for much of the Queen of Soul’s best-known work: Her session reels for Atlantic Records in the ’60s, a body of work including songs such as “Respect” and “Chain of Fools,” were wiped out by fire at a New Jersey warehouse in 1978.

That disaster helps illustrate the potential impact of the 2008 Universal fire: Every post-1978 reissue of vintage Aretha Franklin music has been drawn from sources well down the line from the pure multitrack tapes. In 2017, for instance, the producers of an album blending classic Franklin recordings with the London Philharmonic Orchestra were relegated to using the singer’s stereo masters, limiting their flexibility with the project.

What to Know About Sean Conley, the White House Physician