Technology has distanced us | Letters to the Editor 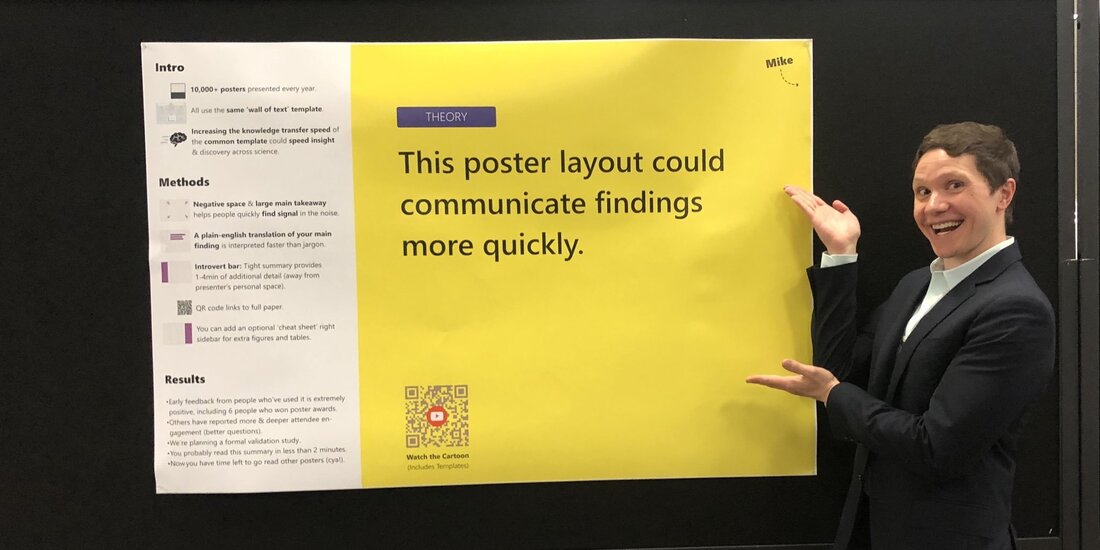 Michigan State University doctoral student Mike Morrison has a redesign for scientific posters to spell out their main point in big, easy-to-read letters. 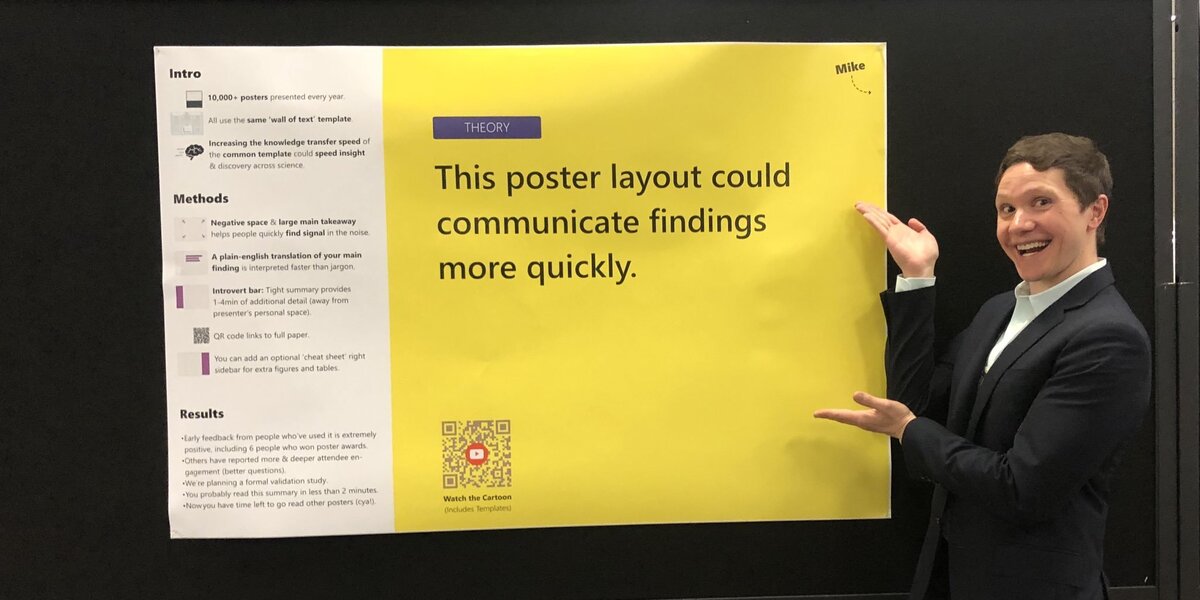 Michigan State University doctoral student Mike Morrison has a redesign for scientific posters to spell out their main point in big, easy-to-read letters.

Mike Morrison hardly looks like a revolutionary. He’s wearing a dark suit and has short hair. But we’re about to enter a world of conformity that hasn’t changed in decades — maybe even a century. And in there, his vision seems radical.

“We are about to walk into a room full of 100 scientific posters, where researchers are trying to display their findings on a big poster board,” says Morrison, a Ph.D. student in psychology at Michigan State University.

The idea of a science poster is simple. Get some poster-making materials and then slap on a title, the experimental methods and the results. Almost everyone has created a poster like this at some point — often in childhood, for a school assignment or a science fair.

In the world of science and medicine, posters are a huge deal. Major professional conferences invariably feature sessions that are entirely devoted to research posters.

Posters get tacked up on rows of boards that fill ballrooms and convention centers. Scientists often stand beside their posters, hoping their work will catch the eye of other experts who are milling around the room.

Tens of thousands of people go to these sessions every year. The annual meeting of the Society for Neuroscience alone draws around 30,000 people. Geophysicists, chemists, experimental biologists, planetary scientists, cancer researchers, physicians — no matter what the field, science and medicine professionals routinely go to conferences, and that means spending time either making or viewing posters.

“A poster session, ideally, is this incredibly fertile ground for creative insight,” says Morrison, who met me at the annual meeting of the Association for Psychological Science in Washington, D.C. “You’re walking into a room, completely open-minded, and ready to hear and read findings around stuff that you didn’t even study before. If there are 50 posters here, it should transmit 50 new insights into your brain.”

Morrison says the reality is not like that. He believes poster sessions are usually a dispiriting waste of time for all involved. 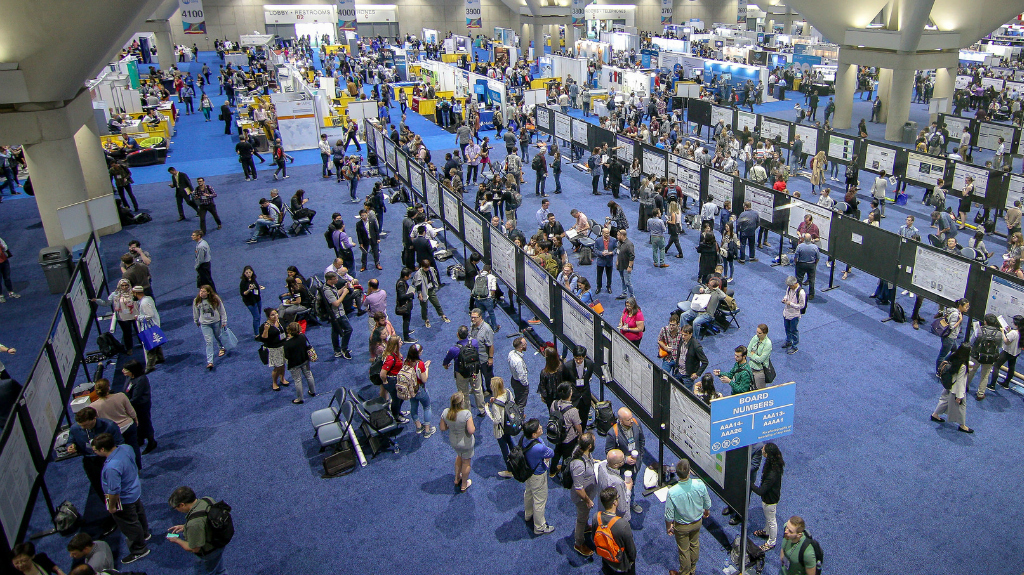 Together, we walk through a ballroom filled with posters.

It’s impossible to take in unless you stop in front of a poster to read it. But there are so many posters that we just keep moving.

“It’s mostly noise; you’re just skimming desperately,” says Morrison, “and you’re going to miss a lot as you walk by.” Maybe people stop and engage with one or two posters, Morrison says, but it generally takes time to even figure out what the poster is about. That means researchers often spend time with a poster that turns out to be not all that significant for them.

In his view, this is more than just a bummer for scientists. Insights that could help humanity are buried in a jumbled mess that keeps them from being noticed by the right folks.

“So whatever you care about — whether it is exploring the universe sooner or curing a disease that your friend has — is happening slower right now than it should, because we have all these inefficient systems for disseminating knowledge among scientists,” says Morrison. “I think people assume that science is progressing as fast as it can, and it’s not.”

This really bugs Morrison. So a couple months ago, he tweeted out a little video. It’s a cartoon he made about the nightmare that is the scientific poster session.

In it, he proposed a new poster design. It looks clean, almost empty. The main research finding is written right in the middle, in plain language and big letters. There’s a code underneath you can scan with a cellphone to get a link to the details of the study.

This video went viral. His design is now popping up all over the place. In fact, in our visit to a poster session, we easily spot one that’s surrounded by more traditional posters.

This poster says, in giant letters: “Jurors overwhelmingly vote ‘not guilty’ when an eyewitness is inconsistent in their identification, regardless of the actual reliability of that identification.” It was created by Kendra Paquette, a student at California State University, Fullerton.

“Everybody’s talking about this new poster format, they call it Poster 2.0,” says Paquette. “There’s a little video that I watched and it just made sense.”

Told that Morrison created the video, she greets him like he’s a rock star. “I’m totally supportive of it,” says Paquette, who admits that she felt a little nervous about trying this new format.

But it seems like a lot of people have seen the video, she says, so “everyone’s like, ‘Oh, I wanted to try it, I’m so glad you did, now I’m going to do it next time.’ “

Clearly, Morrison’s idea has struck a nerve. On Twitter, scientists have been debating its merits and sharing photos of their own rejiggered posters.

One enthusiastic supporter is Christian Suharlim, a public health researcher at Harvard who became familiar with the problems of the usual wall-of-text design when he was involved with running an event called “Poster Day” at the Harvard T. H. Chan School of Public Health.

“It was just impossible to gain insights from the many posters presented in such a short time,” Suharlim told NPR. “When we ask people to rate ‘Audience favorite,’ they have small numbers of posters they evaluated, and are unable to provide their ratings effectively. It is just not an efficient design.”

That’s why he says Morrison’s new format has been made the required layout for a poster session on immunization economics that’s being held next month. It will have more than 40 posters from 20 countries, and all will feature the spare design.

“The current method is not effective in communicating research findings. For instance, in my field, we all want improvements in our life: vaccines for all diseases, easier delivery of vaccines, innovative way to finance vaccines, effective ways tackling vaccine hesitancy,” Suharlim says. “Experts are all coming to these conferences and they have limited time to update their knowledge.”

Morrison is now working on experiments to study the effect of different poster designs. He wants to track people’s eyes to see if they are more likely to read a simple poster, and wants to see if they actually absorb and retain more information from less-crowded posters.

In the meantime, he did what any scientist would do. He created a poster about his new poster.

“In the middle it just says, ‘This poster could communicate findings more quickly,’ ” says Morrison.

And he presented it at this psychology conference — at a poster session.

As Covid deepens inequality, some ask if technology can narrow the gap